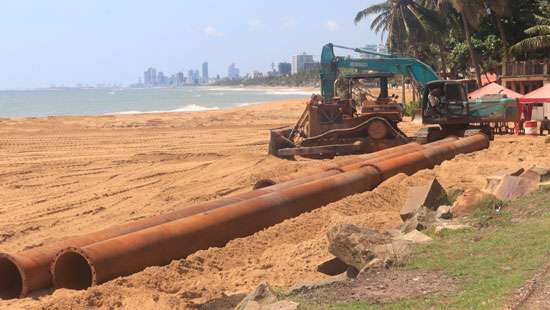 Amidst environmental concerns, the construction of an artificial beach between Kalutara and Mount Lavinia is being expedited.

The Kalutara North Calido beach Development Project is being constructed in three stages.

Construction work on the project was in full swing over the weekend in Mount Lavinia under tight police security.

The Coast Conservation Department said that cabinet approval had been obtained for the project, and once completed, will help boost the fisheries sector and tourism in the area.

President Gotabaya Rajapaksa had inspected the progress of the project in March.

Under the first phase of the project, a 2 km long and 25 m wide an artificial beach will be constructed. Three hundred thousand cubic meters of sand will be used for the filling process.

He said that construction of the artificial beach was proposed following extensive sea erosion in that area.

Daily Mirror visited the location over the weekend and saw construction work ongoing amidst tight security.

Air Force officers who arrived at the location at the time had also questioned construction workers on the project as they were not aware of what was going on.

Asked why there was tight security, the Coast Conservation Department said that there have been concerns from locals about the impact in the area on the environment, and therefore security had been beefed up.

Chandrakeerthi, however, claimed that an environmental assessment report has been obtained for the project and dismissed any concerns that may arise on the impact to the environment.

The construction of the artificial beach is being carried out by a foreign firm, with the involvement of a local company.

The 500-meter section has already been completed

Sand for the project is being extracted from the sea in Ratmalana, with the aid of a dredger. The project will encompass 500m of artificial beach in Mount Lavinia, 1.5 Km in the Ratmalana area and 2 Km in Kalutara.

Construction work on this project is expected to continue into next week.

The former cabinet had approved a similar project. The former government approved a proposal to invest more than US$300 million to reclaim land for a new beachfront from Kollupitiya to Dehiwela.