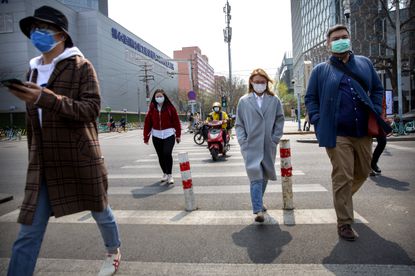 China has reported zero new coronavirus deaths for the first time since it emerged as the nation on Wednesday scaled back lockdown standard and reopened the city of Wuhan, the New York Daily News reported.

The National Health Commission on Tuesday announced 32 new cases of the virus across China, though all of them originated overseas. There were also an additional 30 new asymptomatic cases reported, according to BBC News.

Even more promising, the health commission added that for the first time since they began publishing data in late January, there were no new deaths Tuesday in Hubei’s provincial capital of Wuhan, where the virus was first detected at the end of last year.

The rest of mainland China has not recorded a death since March 31.

The outbreak, which has since infected more than 1 million people worldwide, brought much of China’s bustling population and economy to a screeching halt. Officials implemented strict isolation measures, banned almost all travel in and out of Wuhan and ordered the closures of all non-essential businesses. But almost a three full months later and a level of normalcy has started to return to China, even as other nations continue to grapple with the virus spread.

Despite warning from health officials to exercise caution as coronavirus begins to taper off, hundreds of people flocked to China’s tourist attractions, newly open this week. And on Wednesday, residents will be able to leave the city of Wuhan for the first time in weeks.

The good news comes amid scrutiny over whether China is under-reporting its statistics.

According to data from Johns Hopkins University, the nation has reported more than 82,000 infections and 3,335 deaths.

Cases in mainland China have been falling since March and officials have since shifted focus to a likely second wave of infections brought in from overseas.

The government on Monday announced it would ramp up measures at land borders, where the number of cases detected were exceeding those recorded at airports. It also said it would extend its ban on foreigners entering or transiting indefinitely.