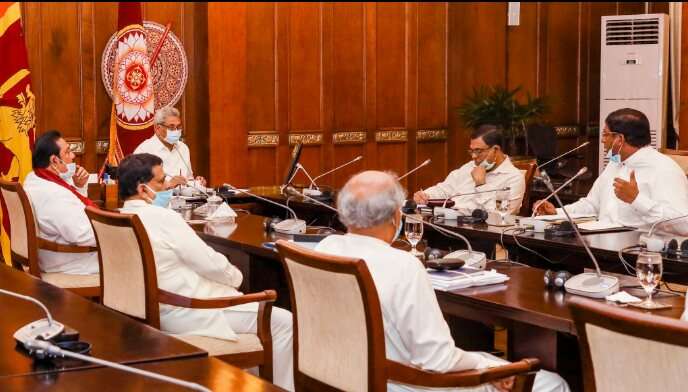 The government and the United National Party (UNP) had agreed to enlighten the respective district level political representatives of the measures taken to contain COVID-19 and to distribute relief to the people, the President’s Media Division (PMD) said. This was agreed during a meeting took place at the Presidential Secretariat yesterday between the representatives of the two factions to discuss the country’s prevailing situation due to the spread of COVID-19. The President detailed the steps already taken to prevent the virus from spreading as well as the plans to implement in the days to come. It has been possible to make early identifications as most of those infected were either already in quarantine centers or those who were identified to have had close contact with the infected, noted President. The discussion focused on the difficulties currently faced by the daily wage earners, self-employed, entrepreneurs, those in the agricultural industries and public servants. Attention was also paid to protecting the economy of the country. As head of the Presidential Task Force, Basil Rajapaksa explained the distribution machanism in place to ensure that essential services, food and medicines reach communities. Furthermore, a relief measure of Rs 5,000/- will reach 530,000 families out of the 650,000 families identified in the country by April 9, he said. Both parties were of the opinion that the programmes enacted to contain the virus should minimize the hardships that people will have to face. It was also agreed that this needs to be an apolitical process. The services and the commitment by doctors, nurses and the medical staff, tri- forces, police and the entire security establishment were deeply appreciated and praised by both the Government and the UNP delegation, the PMD said. President Gotabaya Rajapaksa and Prime Minister Mahinda Rajapaksa led the discussions from the Government’s side. Ministers Dinesh Gunawardena, Nimal Siripala de Silva, Wimal Weerawansa, Bandula Gunawardane, Johnston Fernando and Dullas Alahapperuma represented the Government. UNP was represented by MPs Ravi Karunanayake, Arjuna Ranatunga, Ruwan Wijewardene, Daya Gamage, Palitha Range Bandara, Navin Dissanayake and Lakshman Wijemanna. Secretary to the President Dr. P. B. Jayasundara, Governor of the Central Bank Prof. W. D. Lakshman and Deputy Governor S. R. Attygalle were also present.