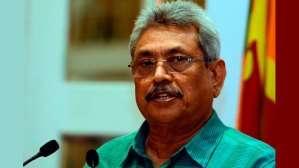 President Gotabaya Rajapaksa has directed the legal experts and the Department of Prisons to look into ways of granting some relief to the prisoners who were charged with minor offences and those who are unable to meet their bail conditions, the President’s Media Division said. The President has issued these instructions during a meeting held at the Presidential Secretariat today with the members of the committee appointed to make recommendations on the possibility of providing legal redress for the prisoners who had committed minor offences. Steps were taken to provide relief to the inmates following an inspection tour by the President at an earlier occasion, the PMD said. The Committee is scheduled to meet the President again on March 26 to submit their recommendations on granting legal reliefs for inmates who are currently unable to pay fines or pay for bail money or produce personal bail. The Committee of Lawyers consisting of officials of the Bar Association of Sri Lanka and the Department of Prisons, Commissioner General of Prisons Jayasiri Tennakoon, Director General of Legal Affairs of the Presidential Secretariat, Hariguptha Rohanadheera, Deputy Commissioner of Prisons, Venura Gunawardhana, President of the Bar Association of Sri Lanka, President’s Counsel Kalinga Indatissa, Secretary Kaushalya Navaratne, President’s Counsel Shavendra Silva and Attorney Susara Dinal also participated in the meeting.