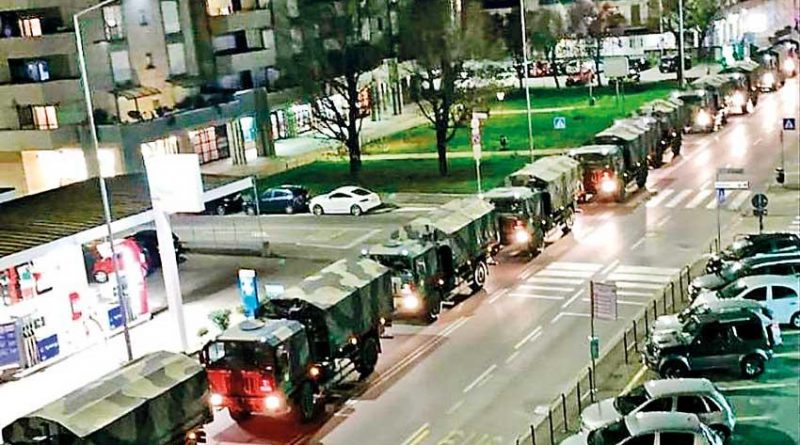 Coffins of coronavirus victims were whisked away on a fleet of army trucks last night after a cemetery in northern Italy was overwhelmed by the death toll.
The column of army trucks brought the dead out of Bergamo on Wednesday night in what Italians have called ‘one of the saddest photos in the history of our country’.

The cemetery in Bergamo can no longer cope with the mounting death toll in the city, where more than 4,300 people have been infected and at least 93 have died.

Mortuaries are full and crematorium staff have been handling 24 bodies a day, including the regular drumbeat of non-virus deaths, meaning the bodies of virus victims have had to be dispatched to neighbouring provinces.

Meanwhile, footage from one overcrowded Bergamo hospital showed patients lying on hospital beds which were lining the corridor of an intensive care unit.
It came as Italy recorded a record 4,207 infections and 475 new deaths from the virus yesterday, squashing hopes that the unprecedented national lockdown was beginning to slow the spread of the pathogen.

An army spokesman confirmed today that 15 trucks and 50 soldiers had been deployed to move bodies to neighbouring provinces.
Italy, (Daily Mail), 19 March 2020