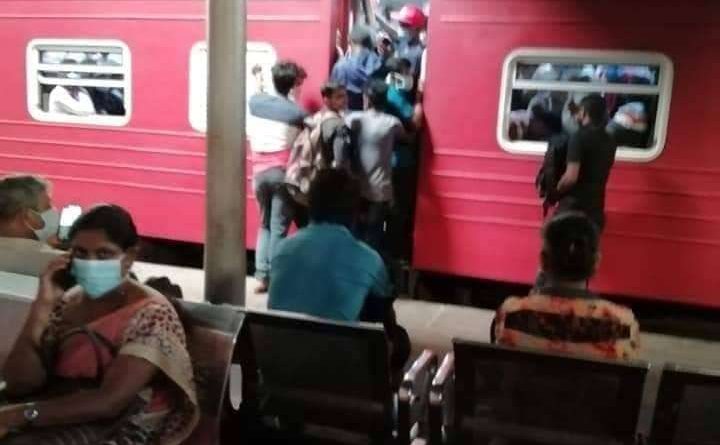 The Government today requested the public to strictly adhere to the social distancing policy of one metre at public places. In a statement, the President’s Media Division (PMD) said this should be adhered to while travelling in public transport as well. “In order to observe the social distancing in buses and trains must carry only half of the number of passengers that they normally transport,” it said. The statement further said, “In an attempt to mitigate the spread COVID-19, the Government has taken two more stern measures today. First is the imposing an island-wide curfew with effect from 6.00pm today (20) until 6.00am on Monday (23). The Government will announce the time of re-imposition of curfew on Sunday (22). All forms of picnics, pilgrimages and leisure tours of foreigners have been suspended with immediate effect. It has been identified that congregation of people is escalating the spread of the pathogen. However, groups of tourist undertake leisure tours in the country. Locals too go on trips ignoring the prevailing threat. The main objective of this step is to prevent gatherings of such nature. Securing the daily life of the citizens is the utmost priority of the Government and President Gotabaya Rajapaksa daily studies the situation in the country and gives directives to the officials on future measures,. The Government has dispatched adequate food and other essential items to shops including Sathosa and Co-Operative Societies outlets. The trade authorities have been advised to distribute the items without causing any hardships to the general public. Following the notification by the World Health Organization on COVID-19, President Rajapaksa took several effective measures to combat the spread of the virus. The Task Force on Prevention of Coronavirus was established on February 26th. Sri Lanka is the first country in the world to implement such mechanism. The President takes decisions following regular discussions with the members of the Task Force and other relevant officials. At present, 17 quarantine centers with all required facilities have been set up at various places of the island. All the passengers arriving from overseas are being subjected to quarantine. Around 19 hospitals are ready to treat the infected. Established under the directives of President Rajapaksa, the National Operation Center for Prevention of COVID- 19 Outbreak, carries out its functions from No. 1090, Sri Jayewardenepura, Rajagiriya. The Center is tasked with the responsibility of implementing prevention and management measures through proper coordination between public health and other relevant services. During the meeting with the members of the Task Force held on last Tuesday, the President requested not to use the situation for narrow political gains. Although, the challenge before the country is undoubtedly severe, President pointed out that steps need to be taken while carefully studying every aspect and without causing any disruption to the daily life of the people. Certain groups with vested interests are engaged in maliciously spreading false information using Social Media and words of mouth. Some of them have already been identified. Necessary legal actions will be taken against them.”