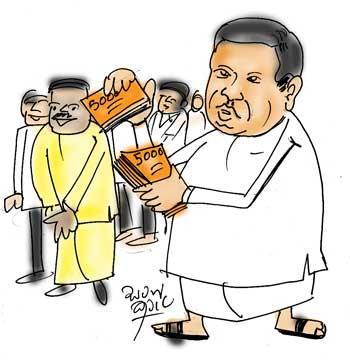 A roly-poly political high-up from an area South of Gin Ganga is said to be offering Rs. 2.5 million each to popular local politicos willing to run as his party’s candidates at the forthcoming general poll.

This political high-up from a party bedevilled by internal squabbling is reportedly finding it difficult to muster enough suitable candidates to be presented to the district nominations board. So, he had decided to entice some popular local politicos by offering them money.

The political high-up had decided to pick popular members of local bodies in the area in the absence of suitable politicos at the provincial level.