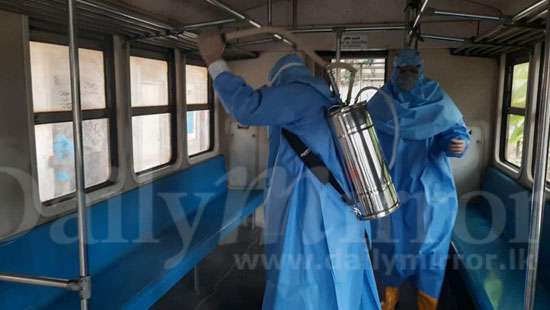 A programme to sterilize all train compartments arriving at the Dematagoda, Maradana and Maligawatta Running Sheds was commenced today, General Manager of Railways, Dilantha Fernando said.

He said the sterilization campaign was launched with the aim of protecting the passengers from the coronavirus, which is a threat to the world.

He added that over 100 compartments are being sterilized and separate staff have been deployed for this purpose.

However, he said there is no plan to sterilize all railway stations at the moment and that the Sri Lanka Air force personnel were sterilizing the Fort Railway Station and the Maradana Railway Station.

He further added that several railway stations have allocated facilities for washing hands.