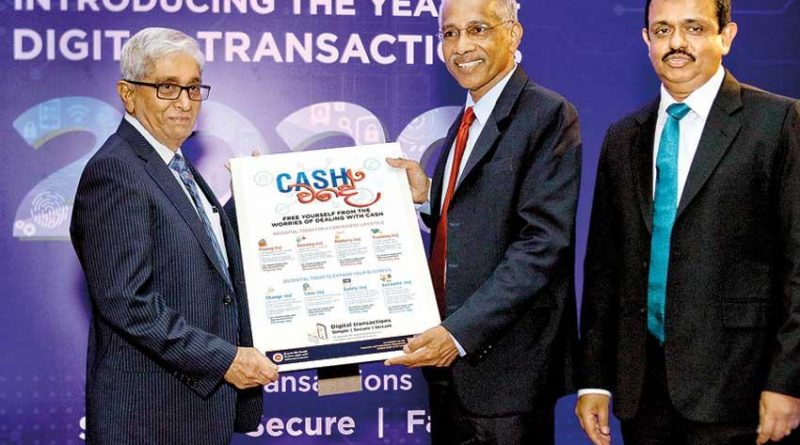 In an effort to speed up Sri Lanka’s journey towards becoming a cashless society, the Central Bank (CB) yesterday launched a fresh drive to push the economy towards digitisation.
Calling 2020 as the Year of Digital Transactions, the CB said that throughout the 12 months, the focus of the financial sector regulator would be to get more banks on board, so that the digitisation agenda can be implemented across the country via their customers.

CB Governor W.D. Lakshman said that while it is acknowledged that the acceptance of digital transactions would transform Sri Lanka’s financial sector, it would lead to greater financial inclusion and pave the way for greater economic growth.

“The CB needs to balance the opportunities when new technologies open up. There are a number of steps taken by the CB to ensure financial system stability to encourage digital innovation and this is done in close collaboration with the banks and fintech firms,” the governor said.

Although the CB acknowledged that the benefit of going digital is beyond transaction convenience, presentations made during the launch event showed that not many banks have come on board, despite the required infrastructure made available by the CB via LankaClear, the national payment infrastructure provider.

Meanwhile, acknowledging the room for improvement, CB Assistant Governor R.A.A. Jayalath said, “The CB will become the catalyst in promoting a digital economy and will encourage banks and businesses to adopt the necessary technology, so that we can become a cashless society.”

The initiatives to increase the values and volumes of digital transactions include efforts in implementing the National Quick Response (QR) code, branded by the CB as ‘Lanka QR’.
Currently on board the initiative, conforming to the Lanka QR specifications, are four banks—Bank of Ceylon, Commercial Bank, Hatton National Bank and Cargills Bank. However, to bring about interoperability, at least 10 banks need to conform to the Lanka QR standards.

The findings of the survey showed that account ownership at banks stands at 88 percent, with men at 89 percent and women at 87 percent.

Observing ownership of debit and credit cards, which is gaining popularity in the country, the report showed that cash remains the preferred mode for transactions with only 14.8 percent of the population using debit cards at retail stores and 9.7 percent using credit cards.