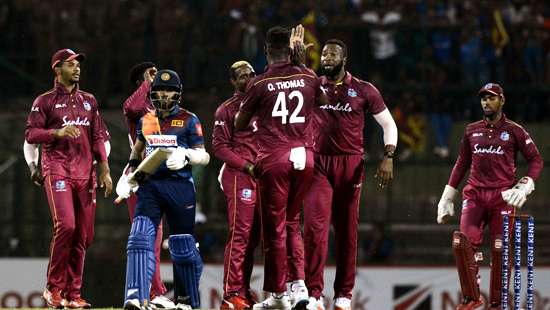 West Indian right-arm pacie Oshane Thomas wrecked the Sri Lankan top order in their run chase of 197, ending with impressive figures of 5 for 28 and laying the foundation for a 25-run win for the visitors in the first T20I played at the Pallekele Stadium today (04).

Thomas struck in his first over he bowled, the second of the game, and was unlucky to miss out on a hat-trick after getting rid of Avishka Fernado and Shehan Jayasuriya in successive deliveries.

Kusal Mendis negotiated the hat-trick ball but fell on the following delivery to give Thomas a three-wicket first over, leaving Sri Lanka struggling on 17 for 3.

Kusal Janith Perera and Angelo Mathews were making smooth progress when Thomas made another breakthrough with the prized wicket of Mathews, who together with Kusal Perera added 24 runs for the fourth wicket.

Dasun Shanaka who joined Kusal Perera did not last long as he faced only eight balls for his two runs before becoming Thomas’ fifth victim as Sri Lanka fell into deeper trouble with the score on 56 for 5 in the sixth over.

Kusal Perera and Wanindu Hasaranga took on the daunting task of rescuing Sri Lanka, who completed a white-wash of the Windies in the ODI series a few days, with the pair defying the Windies bowlers for a considerable period.

At the fall of the fifth wicket Sri Lanka was left with 142 runs to make in 84 balls, but the pair gave their side some hope as they posted the 50-run partnership in 32 balls which followed with Kusal Perera reaching his half ton in 28 balls.

The duo were nearing a century partnership, but Hasaranga was unfortunate to mistime a Rovman Powell delivery that hit his pads, initially seeing the Windies appeals being turned down.

But the visitors reviewed and the decision was overturned, meaning Hasaranga had to go back, ending a valuable 87-run stand for the sixth wicket.

Hasaranga made a 34 ball knock of 44 with four boundaries and the separation of the pair proved to be decisive for Sri Lanka as Kusal Perera’s dismissal followed soon after having made a quick-fire 66 in only 38 balls which had six boundaries and three sixes.

The West Indies bowlers had little difficulty in brushing off the tail end batting as they romped home to victory with five balls remaining.

Earlier West Indies skipper Kieron Pollard winning the toss and electing to take first lease of the wicket saw openers Lendl Simmons and Brandon King giving them a flying start with a 74-run partnership off just 50 balls before they were separated with the dismissal of King.

Simmons joined by Nicholas Pooran put on brief but quick 32-run partnership in 25 balls for the second wicket.

This followed with another fine partnership between Simmons and Andre Russell who together scored 39 runs in only 17 balls for the fourth wicket before Russell was clean bowled by Lasith Malinga for 35 runs.

Skipper Kieron Pollard kept up the momentum and along with Simmons further frustrated the Sri Lanka bowlers. The pair had things their own way as they put on a valuable 45 runs in only 24 balls before being separated with the dismissal of Pollard who too cracked a 16 ball knock of 34 which had three boundaries and two sixes.

In the remaining four balls of the innings the Windies added a further six runs to end their innings with a formidable score of 196 for 4 with opener Simmons who batted right throughout the innings remaining unbeaten on 67 off 51 balls which had seven hits to the ropes and two sixes.

The two teams will play their second T20 tomorrow at the same venue.

Lendl Simmons not out 67

Fabian Allen not out 03

Lakshan Sandakan not out 01