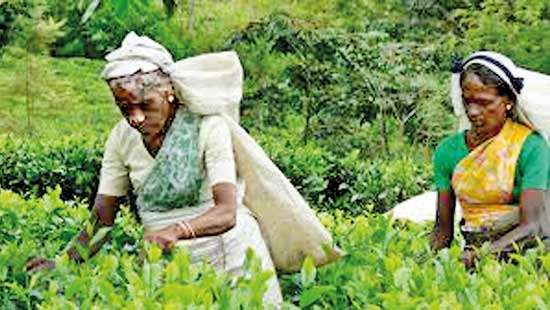 By Nishel Fernando
The announced minimum daily wage of Rs.1, 000 for plantation workers is unlikely to come into effect on March 1 as decreed by the government, as wage negotiations with plantation firms and trade unions are yet to make a breakthrough with only a day remaining to reach consensus.

Mirror Business learnt that no meeting took place among Regional Plantation Companies (RPCs), the government and the trade unions since last week to find a way to increase the current minimum wage of Rs.855 to Rs.1, 000.

President Gotabaya Rajapaksa proposed to increase the daily wage of estate workers to Rs.1, 000 with effect from March, and the proposal was approved by the Cabinet of Ministers in mid January.

Following the announcement, the RPCs submitted an alternative wage model based on productivity and revenue sharing to the government, which would enable the implementation of the announced wage.

RPCs pointed out that such a wage increase under the current wage model would cost them Rs.12-14 billion including gratuity payments.

Secretary to President Dr. P.B. Jayasundera has been leading the negotiations with the RPCs.

Despite several rounds of discussions, the government and RPCs haven’t been able to reach a consensus on how to move forward.

RPCs stood firm with their proposed wage model during the last meeting held mid-last week with the government while emphasising that it was not possible to grant the proposed wage hike under the current wage model.

However, since then, there had been no development on the announced wage hike.

“We are in the dark. We don’t know what’s happening. They haven’t responded to our proposals,” a RPC official told Mirror Business.

The trade unions have been against a productivity-based wage model or a revenue sharing wage model, although, they had acknowledged the need to move on to such a wage model earlier.

The trade unions demanded Rs.1, 000 basic minimum wage for workers during the renewal of the last biennial Collective Agreement, but eventually reached an agreement with RPCs for a minimum daily wage of Rs.855 with a basic daily wage of Rs.700.

Plantation Industries and Export Agriculture Minister Dr. Ramesh Pathirana earlier said that the government may look into the possibility of financing the wage hike initially until the Tea Auction prices bounce back.

However, currently, it is reported that the State-managed plantations under Sri Lanka State Plantations Corporation (SLSPC) & Janatha Estates Development Board (JEDB) are also struggling to pay wages of their workers.

There have been hundreds of cases reported by workers about these entities failing to make EPF and ETF payments.

The listed RPCs incurred over Rs 1.3 billion in combined losses during the first nine months of 2019/20.

Further, the government officials have so far ruled out any extreme measures to implement the wage hike considering the adverse impacts to the overall economy.

President Rajapaksa is also expected to dissolve the Parliament early next week paving the way for a parliamentary election in late April or May.