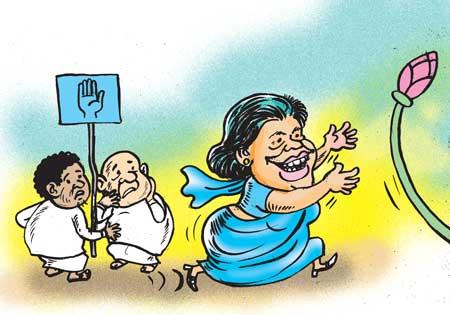 The Blue group that launched a struggle to protect the Blue party under stewardship of the former Madam have now found themselves left high and dry.

The group members have lost contact with the Madam by whom they set much store, for she has made herself scarce these days. All their attempts made so far either to meet the Madam or contact her over the phone have miserably failed.

Meanwhile, they had come to hear that the Madam had been holding hush-hush meetings with some party stalwarts outside their group and had indicated her willingness to cast her lot with the new Blue chief!

These group members who feel that they have been badly let down have also discovered in the meantime that they are being treated as outcasts by the onetime Blue colleagues as well.

They appear to have now decided that the only alternative available to them is to ride the elephant-back, they say.