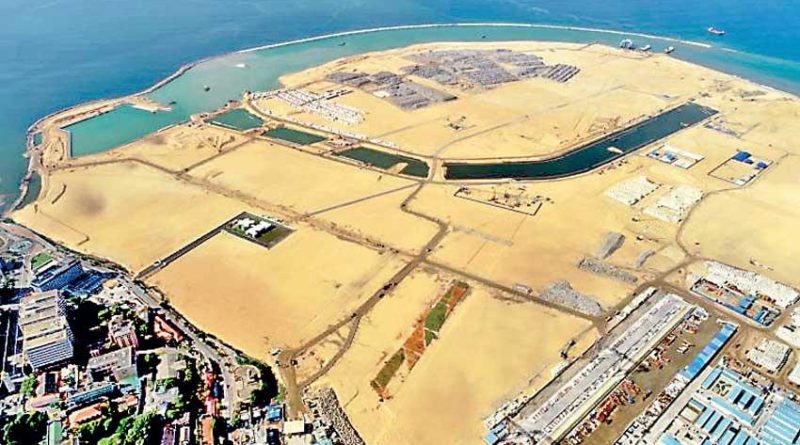 By Nishel Fernando
The project company of Colombo Port City (CPC), CHEC Port City Colombo, is set to kick off the global launch of the Colombo Port City project for investors at World Cities Summit 2020 in Singapore this July with first few developments of the project scheduled to break ground within the year.

“We hope to have our first overseas launch at World Cities Summit 2020 in Singapore in July. We have already done a soft market testing. There’s definitely a very good interest from global investors, but all of them are waiting to understand the provision of the proposed law declaring CPC a special economic zone,” CHEC Port City Colombo, Head of Strategy and Business Development, Thulci Aluwihare told Mirror Business.

The World Cities Summit is scheduled to be held from July 5-9, 2020 at the Sands Expo & Convention Centre, Marina Bay Sands, in Singapore, where key government leaders and industry experts are expected to address liveable and sustainable city challenges, share integrated urban solutions and forge
new partnerships.

“We are in advanced negotiations with few of them. With the new law also coming on board, we have a very attractive proposition for investments,” he said.

CHEC Port City plans to position CPC as a regional hub, capitalising on the country’s strategic location as there’s an emerging need for such a regional hub between Dubai
and Singapore.

At least, the construction of a yacht marina and a US$ 400 million mixed development project is scheduled to commence within this year.

Aluwihare revealed that CHEC Port City is currently negotiating with an international investor and an internationally reputed operator to develop and operate 3.5 hectare yacht marina in CPC.

CCCC has also pledged to invest US$ 1 billion in a mixed development complex in the proposed financial district of CPC.

Aluwihare noted that the investment would come in two phases. Under phase one, CCCC will invest US$ 400 million in the mixed development project, which would break the ground before end of this year, and the remaining US$ 600 million in a complex in the financial district.

“We have already submitted a proposal to the BOI. Our parent firm’s commitment will instil confidence that we would invest in hard infrastructure as well,” he added.

The construction of a yacht marina and mixed development project are scheduled to be completed within four years.

Aluwihare said that investor sentiment has bounced back after the Easter Sunday deadly attacks as the new government has taken necessary security measures to ensure the country’s security.

He highlighted that there’s high interest from top UK-based boarding schools to invest and operate the proposed international school in the State-controlled
part of CPC.

A three-member committee appointed by the Cabinet of Ministers is currently reviewing CPC’s draft legislation, which would declare CPC as a special economic zone for service exports.
The Central Bank (CB) is also drafting a new Banking Act, that would include regulations governing the banks to be setup in the CPC.

Aluwihare opined that the proposed legislation will be revolutionary for service exports similar to Board of Investment of Sri Lanka Law of 1978, which was for merchandise exports.

The BOI law enabled Sri Lanka to set up special economic zones for industrial exports, which in particular set the foundation for the country’s apparel export industry.

He noted that the CPC would be similar to China’s Shenzhen and South Korea’s Incheon free economic zone.

The proposed legislation is expected to be enacted following the parliamentary election to be held in April/May.

“The government has reactivated the Strategic Development Projects Act (SPDA), which was abandoned by the previous government, until the new law comes into effect in a few months. Hence, any investor who wants to invest now has to come through SPDA,” Aluwihare stressed.

Under the proposed legislation, a State authority or a Commission will be appointed to administer and regulate CPC activities.

Further, the government is expected to gazette development control regulation for the CPC and consequently, CHEC Port City will form an estate management entity to regulate the real estate activities in the CPC. The entity comes under the State authority or a Commission.

Elaborating on CHEC Port City’s land sale strategy, Aluwihare said the project company is focusing on attracting multinational and local firms to set up their regional headquarters in CPC, initially.

“The phase one would be predominately commercially- driven, which means we want trade and commerce to thrive first.   The CPC will be a regional hub for excellence, where multinational firms can come in and set up their headquarters to serve the region.

“Even large Sri Lankan firms can use CPC as their base to address issues in the region,” he added.

He noted that attracting multinational firms would be crucial for CPC’s success.

Aluwihare expects that activities in trade and commerce would create demand for residential occupancy in the CPC.

“Residential population will depend on what kind of businesses we attract,” he stressed.

CHEC Port City plans to release the land plots to the market in a gradual basis without over flooding the country’s real estate market.

Of the CPC’s 269 hectares reclaimed land, 178 are considered to be marketable. CCCC owns 116 hectares of the marketable land on a 99-year lease and the government owns the remaining 62 hectares. In addition, 91 hectares of land are allocated to be used as public spaces.

To contribute US$ 12bn to GDP upon completion

The Colombo Port City (CPC) is expected to contribute US$ 11.8 billion to Sri Lanka’s economy per annum upon completion, according to an independent study carried out by PricewaterhouseCoopers (PwC).

The projected US$ 11.8 billion contribution would amount up to over 13 percent of the current GDP.

The PwC report was launched at the National Law conference held in Colombo last Friday.

PwC was appointed to conduct an independent study to quantify the impact of CPC on the economy of Sri Lanka in five verticals—GDP, employment, balance of point, State revenue and FDIs.

During CPC’s time span, it is expected to attract US$15 billion worth of investment at current market value including US$ 1.4 billion investment made by the project company, CHEC Port City Colombo, a unit of China Communications Construction Company (CCCC) into reclamation of land and for infrastructure development.

CPC is expected to generate around 83,000 employment opportunities for Sri Lankans and non-residents. Construction activities of the CPC project is scheduled to be completed in 2041.