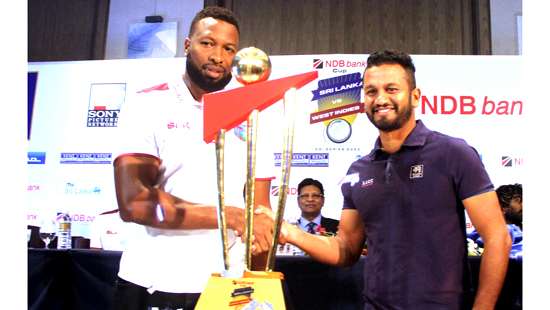 Sri Lanka Head Coach Mickey Arthur today (19) said he was keen to see how his players embraced their ‘defined roles’, when they take on the West Indies in three ODIs and two T20Is beginning on Saturday.

The ODI series will be Arthur’s first as coach in the 50-over format, also his first at home since taking over in December, and the South African said he wanted his players to also establish the brand of cricket they wanted to play under him.

“We just want to keep getting better and better. Everybody has certainly been given very clear role definitions and to see how those guys embrace those role definitions is going to be very interesting.”

“Also we need to establish what’s going to be our brand of cricket and how we can go about that. And hopefully we can get some results that will give confidence in the brand of cricket we want to play over the next couple of years because ultimately that keep you sustained and give you sustainable success. It’s two teams evenly matched and at the start of a journey,” he said.

Sri Lanka’s last ODI assignment in Pakistan ended in a 0-2 series defeat – a tour undertaken without 10 key players over security concerns – but there were some encouraging signs in the T20 series that followed when they beat the number one ranked T20I team 3-0 under the captaincy of Dasun Shanaka.

While Arthur suggested Sri Lanka needed to find their brand of cricket, West Indian Captain Kieron Pollard was hopeful his team can continue their good, promising performances from their recent series against India and Ireland.

“We are pretty confident. When we got to India, and looked at ourselves as a team and that a lot has happened since the World Cup, we wanted to play a certain brand of cricket and we wanted to compete and we wanted to be always in the game.”

It was that same brand of cricket that Pollard expected from his teammates in Sri Lanka.

“(That’s the reason) we got the other series against Ireland and we wanted to show we were a step above those guys. So, now coming up against Sri Lanka, the two teams are evenly matched in terms of where we sit in terms of rankings.”

“It’ll be interesting to see what the guys come out and show. For us, that’s why we came here early because we want to do well as a team and want to continue playing a certain brand of cricket. So, we are looking forward to it and pretty confident of it,” Pollard added.

Meanwhile, Dimuth Karunaratne, who returns to captain the ODI team having been one of the 10 players to opt out of the Pakistan tour, said he was encouraged by the bench strength available to the team.

“The performances of the players who toured Pakistan were encouraging that gives us confidence in our bench strength. The West Indies are a good team and they have played well over the last few series, but we have prepared well and we hope to rotate the team throughout the series,” Karunaratne said.

The ODI series will begin with a day game at the SCC Grounds on Saturday, before moving to Hambantota and Pallekele for the second and third ODIs respectively.