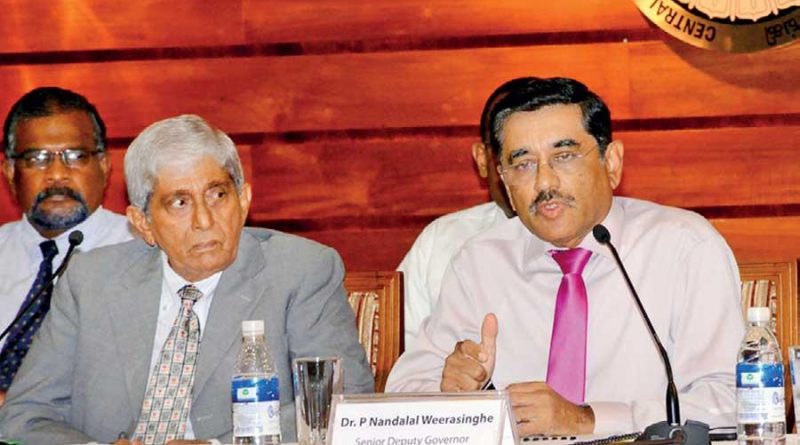 By Nishel Fernando
The Central Bank (CB) has forecast 4 to 4.5 percent economic growth and below 4 percent inflation for next year, backed by the new government’s economic revival programme while meeting estimated US$ 4.8 billion external debt servicing for the year.

“With the revival of economic activity, we expect economic growth to accelerate to around 4 to 4.5 percent and inflation to remain below 4 percent in 2020.

“Beyond 2020, with necessary reforms, annual growth is expected to accelerate to over 6.5 percent while inflation will be managed between 4 to 6 percent,” Prof. W.D. Lakshman told at his maiden press conference as the new CB Governor in Colombo last Friday.

Sri Lanka’s economic growth is estimated to have hit an 18-year low of 2.7-2.8 percent this year, according to CB.

The new government has announced sweeping tax cuts and debt moratoriums for SMEs anticipating a revival in economic activities.

CB Senior Deputy Governor, Dr. Nandalal Weerasinghe revealed that Sri Lanka has around US$ 4.8 billion external debt service payment next year. He said the new government is yet to finalise the short, medium and long term financing plan for the country.

The new government also put on hold Sri Lanka’s maiden US$ 500 million Samurai bond issuance scheduled for this month,  as it is reviewing the financing plan.

“There are many options available; but it’s up to the government to deicide looking at the financing requirements for the year. The new government will have to decide when to go to markets and how much to be raised from commercial markets with different instruments,” he said.

However, he pointed out that CB has sufficient buffers to meet debt-servicing requirements for early part of next year. “This year, we raised sufficient amount of money to meet debt servicing requirements for first few months of next year. Therefore, we are in a comfortable position until at least the new parliament commences its activities somewhere in June next year,” he added.

Further, he pointed out that the first large debt repayment for next year is only scheduled in October with the maturity of one international sovereign bond (ISB).

The Central Bank expects to end this year with US$ 7.5 billion in foreign reserves similar to the previous year.

Governor Prof. Lakshman ensured that Sri Lanka would continue to engage with the International Monetary Fund (IMF) while remaining within the national policy framework.

The Fitch Ratings recently revised the Outlook on Sri Lanka’s ‘B’ rating to ‘Negative’ from ‘Stable’ over debt repayment concerns arising from the recent economic stimulus, which is  likely to increase the country’s borrowing cost from international capital markets.

However, Dr. Weerasinghe stressed that the decision on the outlook revision was premature and the new government should have been given more time to clarify on their policies.

“We requested them to provide sometime for the new government, because if they are wrong, it will take 6-12 months to reverse the outlook downgrade,” he said.

In terms of monetary aggregates, the CB projects the private sector credit growth to rebound to 12-13 percent year-on-year next year backed by tax cuts, announced capital moratorium for SMEs and falling lending rates.

However, private sector credit growth slowed down to 4.4 percent YoY in November from 5.1 percent YoY growth in October.

Driven by low credit expansion, the broad money supply also slowed down to 6.1 percent YoY in November from 6.7 percent in October.

“In the monetary sector, we have seen credit flows coming virtually to a standstill.  Monetary and regulatory measures taken so far, as well as the measures that are being contemplated by the government, including the moratorium on capital repayments of bank loans by SMEs, supported by improving business confidence will result in an acceleration of credit flows in the period ahead. This will also help address the increased NPL ratios of the financial sector,” Prof. Lakshman said.