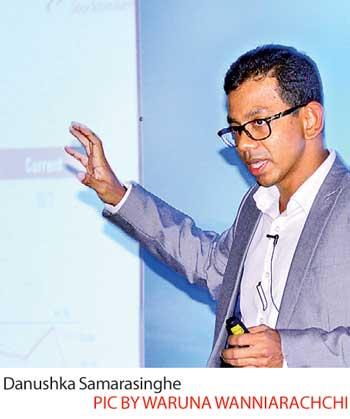 Colombo-based Softlogic Stockbrokers is bullish on Sri Lanka’s potential to become an outlier in a slowing global economy, moving up from the current depressed economic state following the conclusion of presidential election next month, irrespective of its outcome.
The firm forecasts that the country’s economy will rebound to a higher growth trajectory of 5.1 percent, next year, after growing at an estimated 2.5 percent this year.
Similarly, the All Share Price Index (ASPI) of the Colombo Stock Exchange (CSE) is also projected to surpass the 6, 500 mark from the current 5, 500-5, 700 driven by the expected improvement in sentiment after the polls.
“We are now entering a cycle where growth seems to be slowing down in the developed economies. But Sri Lanka will be an outlier, potentially with some other frontier markets and emerging economies in the bandwagon with us,” Softlogic Capital Markets CEO Danushka Samarasinghe said.
He made these forecasts at the Softlogic Stockbrokers’ Investor Forum 2019 themed ‘Sri Lanka: An uncut diamond’ held in Colombo last Thursday.
Samarasinghe noted that the weakening dollar coupled with slowing global economy would help Sri Lanka to raise foreign funds at a cheaper rate for development activities, despite the high interest regime in the domestic market leading to an economic uptick.
“Although our domestic rates could be sticky, we would have the ability to raise foreign funds at a lower rate, which could go into infrastructure investment trickling down to consumption.
“We are already seeing some handouts being given to the State sector, which will drive the consumption up. With consumption increasing, corporate earnings would also gradually follow through,” he added.
Samarasinghe expects these developments to revitalize the current diluted sentiment and negative thinking.

Speaking on the equity market, he highlighted that this time around there has been less volatility in the CSE prior to the presidential election, although historically, election periods had generated more than double the annual average of market turnover.
“What we think is irrespective of who wins the election, the situation is going to better than what it is right now,” he noted.
He opined that the attractive valuations in the CSE and weakening dollar coupled with enhanced fiscal position would attract local investors and foreign portfolio managers back to the market.
“When the dollar weakens, fund flows to frontier, and emerging markets have always increased.
“With a depressed economic situation, but fiscally at a better position, the sentiment could change in the coming months. Therefore, we see that Sri Lanka is going to be an outlier in the global market along with several other frontier and emerging markets.
“Some investors and foreign portfolio managers have identified the improved fiscal position, but are waiting for tipping point to enter. Sri Lanka will be again on the limelight of local investors as well as foreign portfolio managers,” he said.
As the Parliamentary elections are expected to be held in March next year, following the presidential election in November, Samarasinghe noted that investors and the private sector would be able to make informed decisions based on the outcome of the presidential election.
However, he was doubtful of a significant decline in domestic interest rates post presidential election.
Despite the current low growth environment, he stressed that Sri Lanka is buried in too much pessimism noting that fiscal deficit, trade deficit, lending rates, foreign direct investment, inflation, foreign reserves, tourist arrivals, per capita income and workers’ remittances have made significant strides by 2018 compared to 2008.
However, he pointed out that the improved fiscal deficit came at the cost of lower GDP growth with the introduction of various new taxes on the private sector and the increasing of existing tax rates.
Sri Lanka’s fiscal deficit declined to 5.3 percent of GDP last year from 7.6 percent in 2015.
Driven by lower GDP growth and rupee depreciation, the debt to GDP ratio climbed to 82.9 percent last year. Softlogic Stockbrokers estimates debt to GDP ratio to further increase to 87 percent this year and then to decelerate to 83 percent of GDP next year.