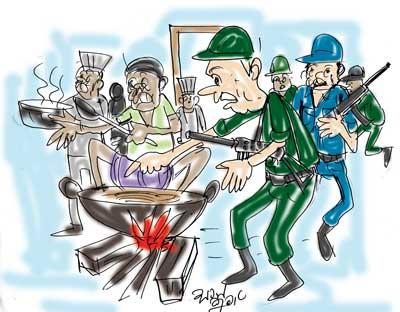 A very high political authority was due to attend an important religious ceremony in Siyane Korale and a group of his security personnel had visited the area to look into the security concerns well ahead of the event.

While on the inspection round, the security personnel had learnt that a certain leading catering service had been selected to supplying meals for all participating in the religious ceremony. And they had visited the catering service and asked the caterer to show them the samples of the foods to be supplied for the upcoming event. When the caterer had shown them the samples of foods, the security men had immediately said the foods shown were not fit for the event.
The caterer, however, had protested that his catering service was very popular and thousands of customers he had served had nothing but praise for the high quality of foods supplied.
“Even the PHIs who regularly come here for inspection highly commend our foods, “he had added.
However, the security men had been firm in their disapproval of the quality of foods.
The caterer and his chefs had later wondered whether the security personnel of the high political authority had visited the place purposely to disapprove their foods for a reason unknown to them, they say.