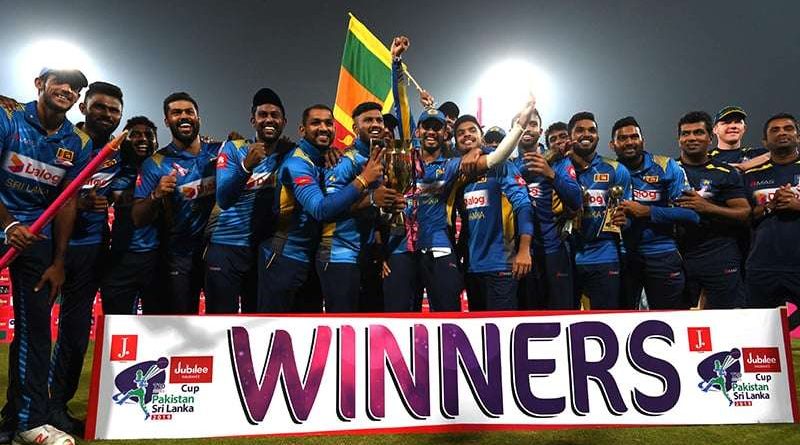 Inexperienced Sri Lanka completed a 3-0 clean-sweep in their Twenty20 series with world number one Pakistan on Wednesday with a 13-run victory in Lahore.

Chasing a modest 148-run target, Pakistan were on course for victory with Haris Sohail’s 50-ball 52 with four boundaries and a six but leg-spinner Wanindu Hasaranga turned the tables with 3-21 to restrict the hosts to 134-6 in 20 overs.

Hasaranga had Sohail stumped in the 16th over and then dismissed Pakistan skipper Sarfaraz Ahmed (16-ball 17) in the 18th to give Sri Lanka victory on a match day designated as Pink Day for breast cancer awareness.

“It’s really a good victory,” said Sri Lankan skipper Dasun Shanaka. “All the players were bonded, that was the key to our success.

“There are no extraordinary players here — they’re all talented, but the unity was the secret. If we play smart cricket, there’s always a possibility to win.”

Oshada Fernando had struck a brilliant 48-ball 78 with three sixes and eight boundaries — the highest by a Sri Lankan player on T20I debut — to lift Sri Lanka to 147-7 in their 20 overs.

Jehan Mubarak and Danushka Gunathilaka — who both scored 46 each — had held the previous record for most runs on a Twenty20 debut for Sri Lanka.

Sri Lanka’s victory was their first-ever Twenty20 series whitewash and was achieved despite missing 10 of their top players, including regular T20 skipper Lasith Malinga, who refused to tour Pakistan over security fears.

However their absences did not hurt Sri Lanka as they staged a remarkable comeback after losing the one-day series 2-0 by winning the first two matches of the T20 series by 64 and 35 runs respectively.

Before this, Pakistan’s only Twenty20 whitewash defeat was at the hands of England in the United Arab Emirates in 2015.

“I think we recovered well in the bowling, but we needed another good partnership in the middle but we were subdued; we didn’t express ourselves throughout this series,” said captain Sarfaraz.

Pakistan’s start was once again disastrous as they lost aggressive opener Fakhar Zaman off the first ball of their innings, bowled by Kasun Rajitha for nought.

Babar Azam (32-ball 27) and Sohail added 76 for the second wicket but Sri Lanka applied the brakes as boundaries dried up.

Iftikhar Ahmed hit a six and a boundary in his 17 but targets of 37 off the last two overs and 28 in the last were beyond Pakistan.

Earlier, Sri Lanka rode on a brilliant maiden half century by Fernando, who held the innings together after Sri Lanka lost two wickets for 28 runs in four overs.

They then slumped to 58-4 with Bhanuka Rajapaksa, the star of the second match, falling for just three. Fernando repaired the damage with a fighting 76-run stand for the fifth wicket with Shanaka, who made 12.

Pakistan were once again sloppy in the field, dropping four catches while Sarfaraz spurned a stumping chance behind the wicket.

Paceman Mohammad Amir, who went wicket-less in the first two matches, finished with 3-27.

Pakistan left out the misfiring Ahmed Shehzad and Umar Akmal while

“The stumps for the last #PAKvSL T20I are being branded in pink. All sponsors of the series have also changed their branding colours in the ground to pink,” the PCB said in a tweet.

The venue for today’s game, Gaddafi Stadium, was decked out in pink after the Pakistan Cricket Board (PCB) joined hands with Pink Ribbon to create awareness about breast cancer.