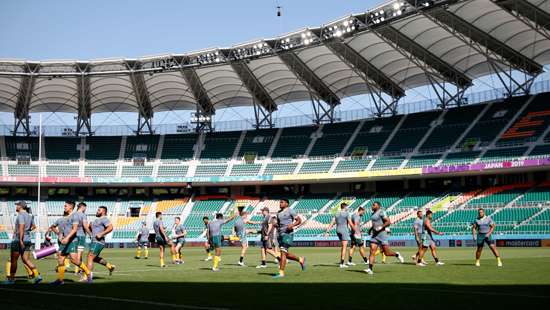 Escaping an incoming super typhoon, Australia will warm up for the Rugby World Cup quarter-finals with a last Pool ‘D’ outing tomorrow (11) against “tough” Georgia.

But the match in Shizuoka today will take place before the typhoon hits, avoiding cancellation and handing the Wallabies a useful run-out against a competitive Georgian side playing for pride.

Wales’ 29-17 victory over Fiji on Wednesday ensured Australia a quarter-final place, with the Welsh likely advancing as pool winners should they see off minnows Uruguay in Kumamoto on Sunday.

With some pressure lifted, the Australia players will still be performing with an eye on making the team for the likely quarter-final against Pool ‘C’ winners England in Oita on October 19. With that in mind, the Wallabies made two late changes on Thursday, bringing in Lukhan Salakaia-Loto and Rob Simmonds for Michael Hooper and Adam Coleman on the bench, both of whom were said to be carrying minor niggles.

Assistant coach Simon Raiwaluni added that the niggles were “nothing too major, but with that (quarter-final berth) confirmed, we decided to go that way”.

Experienced Australia prop Sekope Kepu was under no illusion of what awaited the team: “Georgia have a great scrum and a great forward pack “They are tough buggers and they don’t really take any crap from anybody.”

Georgia opened their campaign with a 43-14 defeat by Wales before beating Uruguay 33-7 and then going down 45-10 to Fiji.

Australia meanwhile beat Fiji 39-21 in their opener before a nail-biting 29-25 loss to the Welsh and a 45-10 win over the Uruguayans.

Former Toulon flanker Mamuka Gorgodze, who came out of retirement to play for Milton Haig’s Georgia in Japan, said his World Cup had been tinged with disappointment. “The objective was to win against Fiji,” said the 35-year-old.

“I was also disappointed against Wales because we gave away too many tries on the first phase.” Gorgodze said his team, however, had everything to play for against the Wallabies. “Australia are a huge team. We are all excited and there is nothing to lose. You can’t not be excited at a World Cup but to play Australia is something special,” he said. “I have a huge respect for them and I’m looking forward to testing my ageing muscles against the young Australians.” One of those young Australians will be teenage wing sensation Jordan Petaia, one of 10 personnel changes to their starting XV from the match against Uruguay.

Georgia only made two changes to the starting XV which played against Fiji, Haig saying he had plumped for experience.“With big matches, experience counts,” he said. “Australia are a team that has a reputation for being one of the top four teams in the world over the decades.“They are a quality side but, as the boys have said, this is the last opportunity for us to go home with our heads held high. “