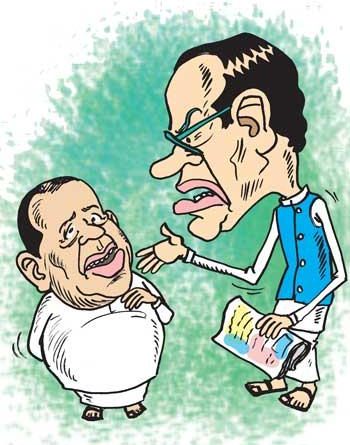 Number One had got highly ruffled and livid when he learnt that a deposit had been made on behalf of Gota’s candidacy while the negotiations between the Blue party and Pohottuwa were still underway.

He had immediately sent for the heavyweights of both Betel leaf alliance and the Blue party. When they all called on him, the Number one had slammed the Pohottuwa leadership for doing dirty on them and said they should do the tit for tat! Addressing, the Betel leaf secretary, he said: “Amare, you go and make a deposit on behalf of the Alliance. Then, someone can contest on the Betel leaf symbol!”

However, the Betel leaf secretary quietly pointed out that it was unwise for them to act in a hasty manner and took a long time in making his point. Finally, Number One had calmed down and agreed to bide their time. The discussion ended on this note, they say.