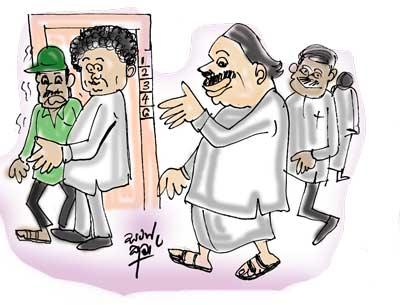 An unusual character from the South who had been playing a double game switching between a Blue cap and a Green one to suit the occasion was caught with his pants down at the august assembly the other day.

This character had been getting favours from two prominent politicos from the South, one Green and the other Blue posing himself to each as a hardcore party supporter. He would wear a Green cap when calling on the Green politico, a Blue cap when meeting the Blue politico.
The other day, this cheat had been waiting for an elevator at the august assembly along with his friendly Green politico wearing a Green cap when his Blue politico had turned up there to use the same elevator.
Despite his surprise to find the man wearing a Green cap, the Blue politico had hailed him and told the Green colleague: “Ah! Do you also know, our Ratna! He is one of my leading supporters!”
“You are mistaken! Ratna is a faithful supporter of mine!” the Green politico had replied.
The Blue politico who had realized that the man had been playing a double game all the time, had said, “Oh! Now only I realize that you are not Ratna, but his twin brother!”
The man with a foot in both camps realizing that the jig was up looked sheepish, but did not utter a word, they say.