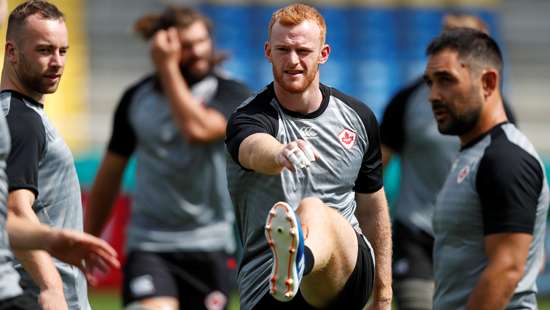 Canada winger Jeff Hassler took a year off professional rugby to drink in life and assess his options, but should prove crucial to his side’s chances of beating Italy in their Pool ‘B’ World Cup opener in Fukuoka tomorrow (26).

The 28-year-old Hassler has been paired with the prolific DTH van der Merwe on the wings at Fukuoka Hakatonomori Stadium, with the winner of the game likely to finish third in the pool and qualify automatically for the next tournament in France.

World rugby heavyweights New Zealand and South Africa are also in Pool B and, short of several upsets of the scale of Japan beating the Springboks four years ago in England, the two should ease into the quarter-finals.

Hassler’s combination with the South African-born Van der Merwe, who is appearing in his fourth World Cup and has carved out a strong professional career in Britain, most prominently with the Glasgow Warriors, should prove crucial.

“These two are playing in top leagues and they know how to score tries,” Italy winger Matteo Minozzi said of the pacey Canadian duo on Wednesday. “They are quick and powerful, and we must make sure we keep maximum attention on them.” Hassler played for five seasons with Ospreys in the Pro14 but unexpectedly quit at the end of the 2018 season thinking he might take some time away from the game.

While he spent time training with English club Harlequins he decided that he definitely needed a break with Welsh media reporting at the time that he was considering learning how to sail.

The former Canadian football running back’s return to professional rugby earlier this year with the Seattle Seawolves in Major League Rugby could not have been better timed for Canada coach Kingsley Jones.

He was brought straight into the Canada team by Jones for the Pacific Nations Championship and scored two tries against Tonga in just his second test back.

The influence he should bring to the game with his powerful ball carrying could go a long way to the Canadians putting a strong Italian pack on the back foot and help them overcome the disappointment of a 23-18 loss at the last World Cup.

“It’s pretty tough to forget that one,” Canada captain Tyler Ardron said. “Especially when you… think back to how close we were to get that huge win.

“It would have been huge for us, just as it will be tomorrow. We don’t want to go through that heartbreak again.”