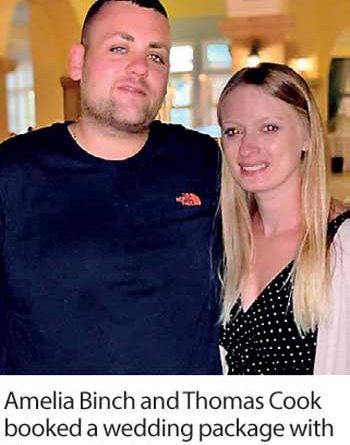 CNN: A groom who shares the same name as the travel operator Thomas Cook has had his wedding plans ruined by the company’s collapse.
Cook and his partner, Amelia Binch, were due to get married on the Greek island of Rhodes on Friday.
Now they are stranded, and aren’t sure if the wedding can go ahead.
If it does, they don’t yet know whether any of their friends will make it to Greece in time for the ceremony.
“We found out today in the early hours,” Binch told CNN. “We were devastated and still are!”
The couple booked their wedding package with Thomas Cook last year. Binch said the operator promised a “special surprise” since the groom shares the company’s name. They haven’t received anything, she said, explaining that the wedding package the couple bought included not only the ceremony, but also the flowers, wedding cake and entertainment. It’s not clear if any part of the wedding can go ahead as planned.
“We have some family out here but our friends are due to be flew out Wednesday (including best man) which won’t be able to come,” Binch said.
“We have no plans but to wait and find out when our flight home is.