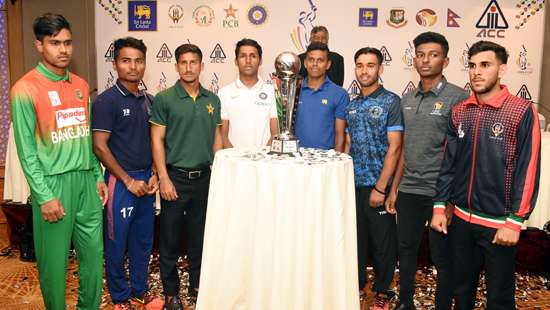 The eighth edition of the Under-19 Youth Asia Cup is set to commence in Colombo today (05).

The tournament will see the participation of youth cricketers from eight nations and the event will run until September 24.

The matches will be worked off across five venues in Colombo, Katunayake and Moratuwa. Sri Lanka, India, Pakistan, Bangladesh and Afghanistan qualified directly to the tournament by virtue of their ICC Full Membership while Nepal, the United Arab Emirates (UAE) and Kuwait secured their berths through a qualification tournament held in Malaysia.

Hosts Sri Lanka have been placed in Group ‘B’ alongside Bangladesh, Nepal and the UAE, and will begin their campaign with a match against Nepal at the R. Premadasa Stadium in Colombo tomorrow.

Sri Lanka Under-19 Captain Nipun Dananjaya, speaking at a pre-tournament media conference said that he feels his side is well prepared for the challenge they will face in the tournament and that they will go into their games with confidence.

“We have played a series of selection matches and practice matches over the past few weeks and I feel we are well prepared. Everyone in the team is very confident and we are ready to give our best in the tournament,” Dananjaya said.

Sri Lanka went down to India in the final of last year’s tournament in Bangladesh and will once again expect stiff competition from their neighbours. India have dominated the Youth Asia Cup having won the competition on six out of seven occasions (including 2012 when they shared the Trophy with Pakistan).

Today’s opening day of the tournament will see Afghanistan take on Pakistan at the P. Sara Oval and India face Kuwait at the CCC Grounds.