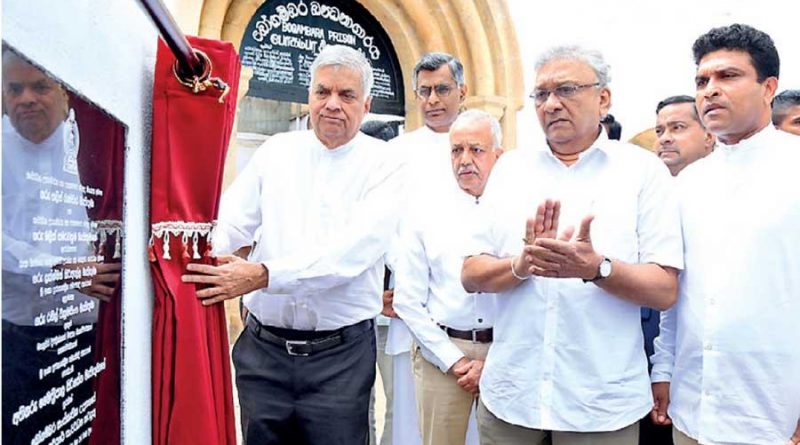 A ceremony was held on August 24 at the site of the Bogambara Prison Complex Redevelopment to announce the opening of Phase I of the Bogambara Cultural Park project.
The project was officially opened by Prime Minister Ranil Wickremesinghe, who formally unveiled a plaque in honour of the occasion and also delivered the keynote address.
The project will offer considerable benefits to the country and more specifically to the city of Kandy since it will include an open air theatre, studio for traditional arts and crafts, a tourist information centre and multiple recreational areas.

The project will also impact favourably on the lives of Kandy residents by generating new employment opportunities as well as creating avenues for trade, tourism and investment.
“We want to develop the city of Kandy including the Bogambara cultural complex in the same way as the Galle Fort, Trincomalee and Anuradhapura were developed as areas of cultural interest, in view of growing tourist arrivals into the country,” Premier Wickremesinghe stressed.
The project for the former prison complex is also of considerable historic value. It is in fact one of the oldest existing buildings in the World Heritage City of Kandy and considered an archeological landmark.
When it was built in 1876 by N.R. Saunders, the Inspector General of Prisons and Police of the British Ceylon Government, Bogambara Prison’s main inspiration was the Bastille fortress in Paris.
Bogambara was Sri Lanka’s second largest prison and housed gallows, as well as serious offenders.
To develop the Bogambara Cultural Park, the government in 2013 transferred the inmates to a new prison complex in Pallekelle.  A decision was made to conserve the buildings because of their archeological and historic value.
The master plan for the project and design redevelopment was established by the National Policies and Economic Affairs Ministry on December 9, 2016 and will be implemented by the Development Strategies & International Trade Ministry, Megapolis and Western Development Ministry, Urban Development Authority, Central Engineering Services Ltd. and Board of Investment of Sri Lanka under the guidance and supervision of the Department of Archeology.