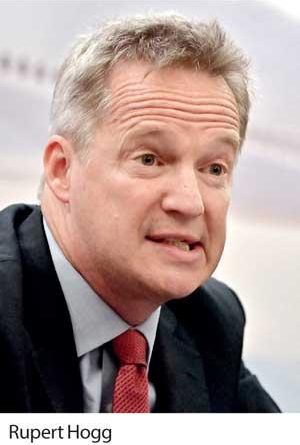 HONG KONG (AFP) –  Cathay Pacific announced the shock resignation yesterday of its CEO Rupert Hogg, compounding a torrid week for the Hong Kong carrier after it was excoriated by Beijing because some staff supported pro-democracy protests.
The 72-year-old airline has been left reeling after it became ensnared in the hardening of rhetoric from the communist mainland over ten weeks of anti-government protests that have plunged Hong Kong into crisis.
Over the last two weeks the airline emerged as a target on the mainland after some of its 27,000-strong workforce took part in, or voiced support for,
the protests.
During a general strike earlier in the month, some staff joined in, including the union representing Cathay Pacific’s flight attendants.
China’s reaction was swift. State media began writing a series of condemnations of Cathay, accusing it of not doing enough to rein it its workers. Then the country’s aviation regulator demanded that the airline prevent such staff from working on flights to the mainland or those routed through Chinese airspace.

Cathay moved into damage limitation mode, firing four members of staff associated with the protests including two pilots agreeing to comply with the new regulations and releasing a series of statements supporting Hong Kong’s embattled government.
But it appears those moves were not enough to save its chief Hogg, who has been credited with helping to turn the airline profitable after two years of losses.
In a statement posted on the Hong Kong stock exchange on Friday, Cathay said Hogg had resigned “to take responsibility as a leader of the Company in view of recent events”.
“The Board of Directors believes that it is the right time for new leadership to take Cathay Pacific forward,” Cathay said in a statement.
Another senior Cathay executive, Chief Customer and Commercial Officer Paul Loo, also announced his departure. “These have been challenging weeks for the airline and it is right that Paul and I take responsibility as leaders of the company,” Hogg said in a Cathay statement.

Hogg has been replaced by Augustus Tang, a veteran of the Swire Group conglomerate, Cathay’s main shareholder.
Analysts reacted with shock to the announcement given Hogg had been well respected and successful during his time in the top spot. “He’s a really good and effective CEO so it’s kind of disappointing to see that,” said one aviation analyst, who commented on the condition of anonymity because of the political sensitivities of speaking openly.
Until recently Cathay had been celebrating a turnaround in its fortunes after Hogg initiated a three-year cost cutting programme that had begun to pay dividends.
Earlier this month it announced a first half profit of US$ 172.23 million, higher than expectations and a reversal of losses from the year before.
But the perception by Beijing that it was either supportive of protests — or not doing enough to condemn protesters was enough to earn it a black mark.
Fired up by the thunderous state media articles, China’s heavily censored social media platforms lit up with indignation from people vowing never to fly Cathay again.
The airline was also forced to cancel some 272 flights on Monday and Tuesday when Hong Kong’s airport became filled with protesters, some of whom physically stopped travellers from boarding.
Shukor Yusof, founder of aviation consultancy Endau Analytics in Malaysia, said Cathay’s censure was a warning to other companies that Beijing will not
tolerate dissent.
“Cathay is only the start,” he told Bloomberg News. China is sending a message to other corporations in Hong Kong that the same thing can happen to them.”