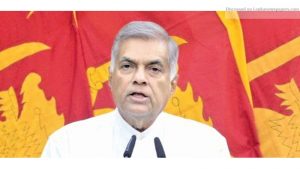 Prime Minister Ranil Wickremesinghe yesterday said that entire government and cabinet of ministers are responsible for the mistakes and lapses which led the terror group to launch successful attacks on Easter Sunday.
Prime Minister said this while testifying before the Parliamentary Select Committee probing the Easter Sunday attacks yesterday.
“Certainly there had been a lapse. There has been a lapse in gathering information on Zahran and his team during the transitional period from which the terror group moved from extremism to launch a violent campaign. Government cannot run away from the responsibility. A probe is being conducted to determine what went wrong,” ,Mr. Wickremesighe said.
The issues pertaining to extremism had been raised several times at the National Security Council. I received few reports from the Minister of Law and Order. Those reports had been sent by the Intelligence Units. The reports were of the ISIS sympathizers and there religious clashes. We had been informed of a Lankan dying in Syria while fighting for ISIS.
Responding to a question raised by the Committee Chairman Ananda Kumarasiri as to whether state Intelligence Services inform him about the extremist activities, the Prime Minister said he got information from the Law and Order Ministers whenever he was the Prime Minister of this country..
The Prime Minister said he was not invited to attend the Security Council meeting after October 2018. “ I attended the Security Council meeting in October 2018 and was not invited for the meeting thereafter. Later I found that IGP too had not been invited for the meeting. I was also able to find out that Security Council meeting was cancelled since October 2018,” he said.
Responding to a question raised by the Committee member Ravi Karunanayake about the information received from foreign agencies and Turkish Ambassador in Colombo disaster and terror groups; the Prime minister said there had been reports from various embassies of the activities in their countries.
Responding to a question raised by Committee member Nalinda Jayatissa on whether he received any information on Zahran the Prime Minister said there were information of strikes, demonstrations, recently there was information of religious groups. “However there was no information of terrorist activities,” he said in this regard.
“We handed over the operations to the Terrorist Investigation Division. Police had informed the Attorney General’s Department. The TID obtained a warrant against Zahran under ICCPR Act. They thought Zahran left the country via sea to India.
The Prime Minister said he did not get any information of prior warning on any date before April 21, 2019.
Responding to a question raised by Dr. Jayatissa as to how did Minister Harin Fernando‘s father get to know about the attack, the Premier said the committee should ask the Minister on that matter.
“Soon after the attacks on April 21, 2019, I found that there was chaos. I went to the ministry. We could summon many who are needed. I had the experience from working under R. Premadasa and other Presidents on how to work in such situations. We met there and spoke to the President and took action, Prime Minister further said.
Responding to a question raised by Committee member Field Marshal Sarath Fonseka that there have been arrests and crack down after the assurance given by the Prime Minister that everyone connected with the April 21 attack are dead or in custody, Mr. Wickremesinghe said ISIS terrorism is like a cancer. “When you destroy one terror group, another group appears. Even individuals have staged attacks in the world lately. You no longer need weapons for an attack as one can drive a car and kill scores of people,” he said while stressing that the county’s legal system should be updated from time to time in order to face the changing situations.