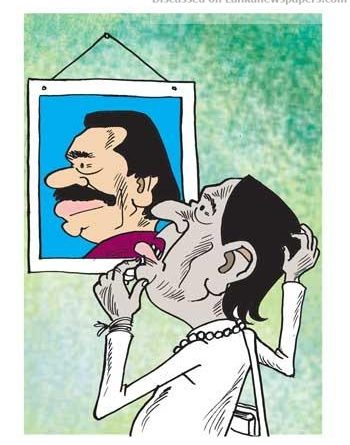 Now that several national polls are around the corner, some top men in politics have made it a habit to seek astrological guidance and divine blessings for the fulfilment of their high aspirations.
A top political authority the other day had sent for a prominent astrologer from a distant corner of the country for a consultation.
The astrologer in question had boarded a city-bound night bus hoping to be at the big man’s residence soon after daybreak. And given the long night ride, he had even taken a hot nightcap for a night of sound sleep, before boarding the bus.
The bus arrived in the city early in the morning and the astrologer got down at Thummulla Junction, hailed a tuk-tuk and asked the driver to take him to the so and so’s residence.
On arrival at the top man’s residence, he explained the purpose of his visit to the security men who challenged him, and the latter took him to the security cell for a body check. Seeing a picture hung on the wall of the cell he exclaimed “Ah! His picture is also hung up here!”
The astrologer, thereafter, was ushered inside the residence and on seeing the former strongman coming towards him, the man went into a flutter. “Ane! Sir, mata samawanna! Mama awe anith loku mahaththaya hambawenna! (I beg your pardon, Sir! I came to see the other big boss!)”
“Don’t worry,” the former strongman told the flustered astrologer. “Now that you are here, tell me something about the situation in the country according to your reading.”
Thus, put at ease, the astrologer made several predictions in response to the former strongman’s request before proceeding to his final destination, they say.