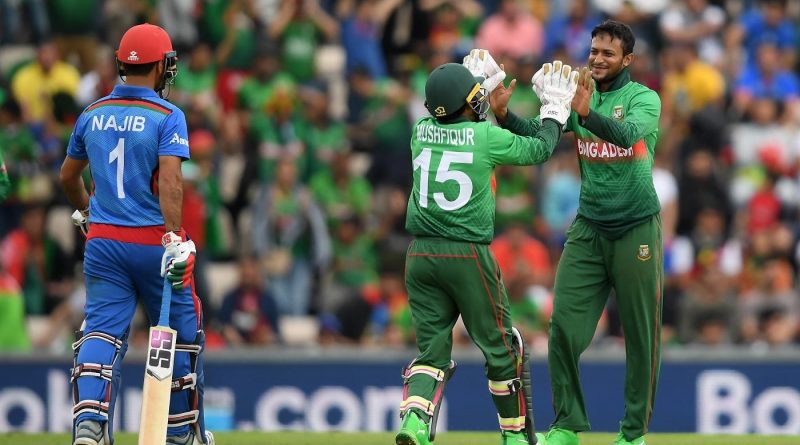 SOUTHAMPTON, England (Reuters) – Bangladesh talisman Shakib Al Hasan reclaimed his position as the World Cup’s leading scorer after producing a stellar all-round display to secure his team’s 62-run victory against Afghanistan on Monday.
Put into bat, Bangladesh posted a strong 262 for seven on a slow track after Shakib, who made 51, forged half-century partnerships with Tamim Iqbal (36) and Mushfiqur Rahim (83).
The left-arm spinner went on to return the tournament’s best bowling figures of 5-29 as Afghanistan, all out for 200 in 47 overs, succumbed to their seventh defeat in a row in the tournament.
Afghanistan captain Gulbadin Naib won the toss and elected to field two days after his team’s narrow-miss against India at the same Hampshire Bowl.
As has been their practice, off-spinner Mujeeb Ur Rahman began with the new ball and tasted success in his third over when Liton Das drove him to short cover.
Mohammad Nabi breached Tamim’s defence and Afghanistan nearly had two-in-two after Shakib was adjudged lbw to Rashid Khan in the first ball of the next over.
The batsman immediately reviewed and got the decision overturned after the ball-tracker confirmed the ball would have sailed over the stumps.
Shakib added 61 runs with Mushfiqur but Mujeeb dismissed him and Soumya Sarkar in a two-wicket burst to peg back Bangladesh.
Shakib’s fifth 50-plus score in six innings contained just one four, illustrating the slowness of the track where boundaries were a rarity.
He now has 476 runs in the tournament, leapfrogging Australian opener David Warner (447), after yet another stellar performance.
Mushfiqur brought up his fifty with the only six of the Bangladesh innings and also hit four boundaries.
After sending down 10 overs of medium pace, Naib returned half an hour later to give Afghanistan a strong, if not flying, start.
He and Rahmat Shah helped Afghanistan inch towards the 50-mark when Bangladesh captain Mashrafe Mortaza introduced Shakib and the left-arm spinner struck with his fifth delivery.
Shah attempted a timid pull shot which found Tamim at mid-on and departed for 24.
Shakib derailed Afghanistan’s chase in the 29th over when he dismissed Naib for 47 and, two balls later, sent back the scoreless Nabi.
The match was effectively over when former captain Asghar Afghan fell to Shakib in the 33rd over.
Samiullah Shinwari made a defiant 49 not out down the order but was left stranded.