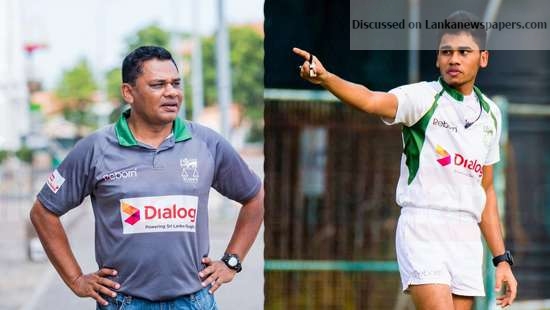 After successfully officiating the first-leg of the 75th Bradby Shield encounter last Saturday, Aaqil Jamaldeen became the youngest ever Referee to have blown the whistle in the most prestigious annual rugby game in Sri Lanka.
In doing so, the 24-year-old followed the steps of his father Nizam Jamaldeen who had officiated in the Bradby Shield way back in 2011 making them the only father and son to have blown the whistle in Bradby Shield encounters.
Nizam who is now the President of the Sri Lanka Society of Rugby Football Referees (SLSRFR) stated that he is ‘incredibly proud’ of the ‘rare feat.’
“It is a very rare feat and I am proud as a father and also as the President of the Referees Society. I hope in future we will see many records like this from other referees as well,” Nizam told Daily Mirror yesterday.
Despite some pre-match criticism about Aaqil being a former Royalist, the young referee did a remarkable job on Saturday.
“He has received a lot of positive comments about his refereeing in the Bradby Shield and I believe he has matured a lot now. The fact that he was also able to blow the whistle during certain Asia Rugby events has also helped him,” added Nizam.
The President of the SLSRFR also believes that Aaqil’s performance would also inspire the other young referees.
“I think this is a fine example of how well our young referees could do and I hope our young referees can take inspiration from this,” Nizam claimed.
Over the years the SLSRFR came under serious criticism from players, schools as well as fans, but Nizam is confident that the young generation of referees would be able to make a huge difference.
“I think our referees have improved a lot especially the young generation. We conduct a lot of workshops and training programmes as the Referees Society. I can clearly see how well they have done,” he concluded.