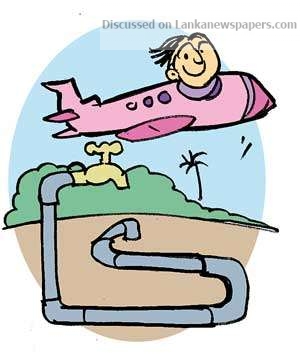 A set of white-collar ones who supervised the laying of mains for a Chinese -funded water supply scheme in a ‘Katugaha’ area had left for China on an official visit.
Asked to account for their visit to China, a colleague of theirs who too was involved in the project had quipped with a derisive smile: “Ah! They have to gone to China to inspect the pipelines from there!”
By the way, some members of a major local body had questioned the provincial politico involved in this project about a fraud that had come to light. But the politico concerned played deaf and dumb on the occasion, they say.