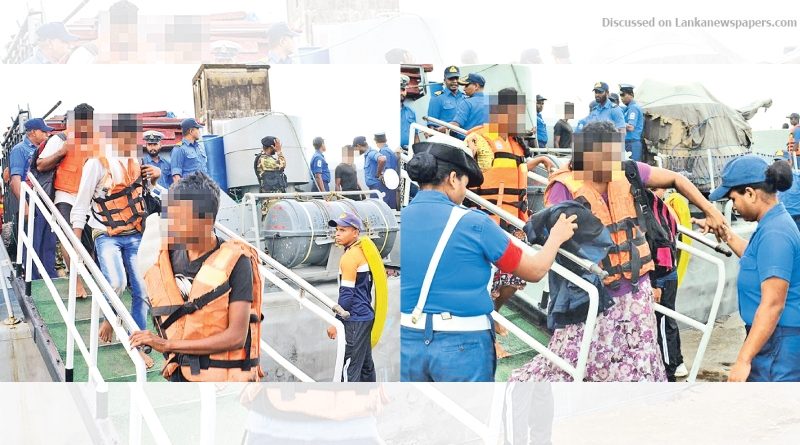 Forty-one Sri Lankans arrested in the deep seas off the Southern Coast while illegally migrating to Australia were handed over to the Galle Port Police by the Sri Lanka Navy on Saturday (25).
Having spotted a suspicious trawler movement about 715 Nautical Miles off the Dondra Lighthouse, the Navy had launched a special operation to inspect the boat and made the arrest in the wee hours of Thursday (23), Navy sources said.
Among the arrested are 32 males, four females and five children, who are said to be from the Chilaw, Katuneriya and Jaffna areas. The children are between the ages of six and 16. The rest is between the ages of 18 and 50.
According to the police, the trawler carrying the suspects had left from Chilaw on May 8. The vessel had faced difficulty on May 15 and had asked for help from a ship sailing nearby about one week later.
The assistance of SLNS Nandimithra was received to carry the suspects back to the island, Navy said.
The suspects were to be produced before the Courts. Galle Port Police are investigating.
Meanwhile, the Sri Lanka Navy said since it remains vigilant over the sea-borne migration of the accomplice who assisted the terror attacks on the Easter Sunday, there would be no opportunity for illegal activities.
The Navy had apprehended 71 illegal migrants so far this year.