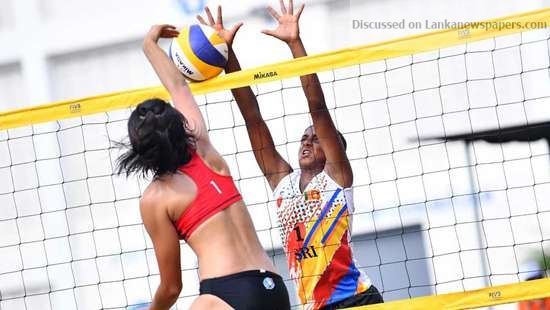 Sri Lanka are confident of winning the Men’s and Women’s Gold Medals in the South Asian Games (SAG) Beach Volleyball Tournament which will be worked off in Kathmandu, Nepal in December.
Vice-President of the Sri Lanka Volleyball Federation’s Beach Volleyball Section C. Ratnamudali said they will be sending two strong teams for the SAG which has the potential to win Gold Medals in both events.
“The National Pool is training daily at a specially constructed beach venue site at the Sugathadasa Stadium in Colombo,” he said yesterday.
The first selection trial was held recently and the final touring squads will be selected in July-August.
There are eight players in the Men’s National Pool and nine in the Women National Pool from which the final two-member teams will be selected.
The National Pool was selected after the players had gone through a training session in Thailand and Indonesia.
The Men’s National Beach Volleyball Pool comprises: Asanka Pradeep, Malintha Yapa, Tharindu Madushantha, Ashane Rashmika, Dileepa Chamika (all from Air Force SC), Indika Tyronne, Jayan Thanuja (both from Army SC) and Anjana Sandeepa.
The Women’s National Pool comprises: Sagarika Gunasinghe (Navy SC), Dinesha Prasadani (Air Force SC), Kasuni Tharaka Lakshani (Navy SC), Chathurika Weerasinghe (Army SC), Nethmini Gunasinghe, Shami Malsha, Hasini Malsha (all from Air Force SC), Monica Jayasinghe (Omega Line) and Deepika Bandara (Casual Line). Former National beach volleyball players Mahesh Perera and Pubudu Ekanayake are in charge of the Men’s and Women’s Team respectively.
Men’s Coach Perera said that they have a very strong team and added that they are the clear favourites to win the Gold Medal.
Beach Volleyball is one of the newest sports to the SAG and will be held for the first time as a medal event in Kathmandu.
Meanwhile, Sri Lanka has the distinction of being the pioneer in beach volleyball in the region.
The first ever National Beach Volleyball Tournament was held in 1992 in Bentota. Sri Lanka have already won over 10 medals in international beach volleyball tournaments. At the South Asian Beach Volleyball Championships held in Hambantota in 2011, Sri Lanka won both Gold and Silver Medals in the Men’s and Women’s Tournament. In addition, in 2009, at the Asia Pacific Beach Volleyball Championships held in Bangladesh, Sri Lanka won the Gold Medal in the Men’s event.