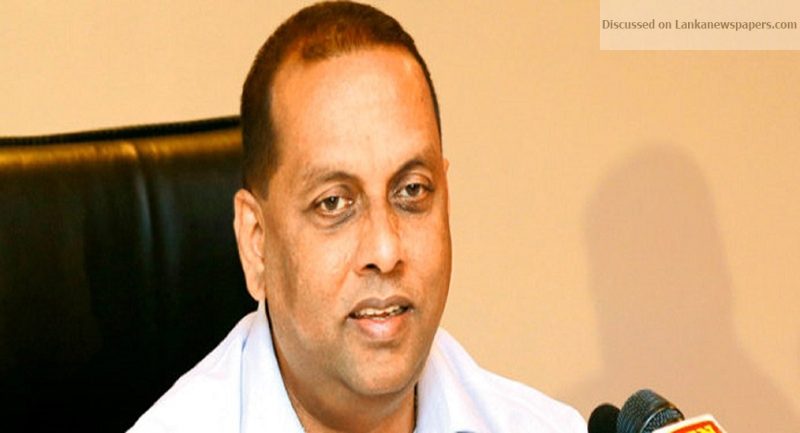 UPFA General Secretary and MP Mahinda Amaraweera said yesterday that a set of 11 proposals prepared by SLFP members to introduce new laws required to ensure national security and strengthen peace, harmony, and friendship between different communities and races will be discussed at the Parliament’s Sectoral Oversight Committee on National Security to be convened in Parliament today.
Addressing a media briefing in Colombo yesterday, he said the objective of introducing this set of rules is to build up a modern Sri Lankan nation under a common set of rules within one country.
“We had discussions with religious leaders, the Opposition Leader and the leaders of all other political parties represented in Parliament in this regard.
All have promised us to support this endeavour by appointing a team within their party and discuss further these proposals at the Sectoral Oversight Committee today.
He added that the inadequacy of the current laws to meet the new challenges levelled by the current wave of extremism and terrorism being faced by the country is a major problem. “Therefore, the onus was on MPs to rectify and formulate new laws that would prevent the recurrence of such attacks and those that would promote a Sri Lankan identity across all ethnic and religious groups,” he said.
“However, it is sad to note that Parliament has not given priority to its main duty of formulating new laws following this incident and instead resorted to pretty debates, discussions and shallow criticism. So, the final impact would be a direct consequence on national security placing the country and its people in great danger,” Amaraweera said. “That is why we all are involved in this project. We expect the support of all citizens, journalists and Members of Parliament to formulate legislation without any delay. They can put forward their suggestions by Fax-011-2777300 and email- legis_com@parliament.lk.
The SLFP members alone cannot make this endeavour a success. But, it is the duty of all 225 Members of Parliament to help make this become a reality to enact the relevant laws, rules, and regulations within a stipulated time frame.
Among the proposals included in the inclusion of an article to the Constitution is to set-up a common ministry for religious affairs instead of a separate ministry for different faiths. “In addition, the SLFP MPs also proposed that common educational institutions should be established to cater to the educational needs of students belonging to all faiths. On the same note, the letter has sought that all educational institutions should thereby function under the complete supervision of the Education Ministry.
Regarding higher educational institutions, the SLFP suggested that the syllabus and methodologies of such institutions must function under the directives of the Higher Education Ministry.
“At the same time, all vocational training and tertiary training courses must be brought under the Ministry of Vocational Training,” the SLFP’s letter added. Among the other proposals included that laws to be formulated are as follows:
. To consider acts of violence and communal hatred as a criminal offense
. To conduct a special examination on foreign lecturers who arrive in the country to deliver lectures on national, religious and cultural matters, for research studies and to conduct workshops.
. In consultation with religious leaders and intellectuals regarding dresses and other conducts (such as full-face helmets and burqas) which are”detrimental to national security and peaceful existence”.
. Preventing the registration of political parties based on race, religion, castes, and regions.
. On the establishment of common rules for religious places and prayer centers.
. To monitor and control the objectives of which foreign funding granted by different countries, organisations, and individuals are utilised.
. To control the dissemination of information containing harmful influence through the internet and social media platforms.
. To teach Sri Lanka students studying overseas on the cultural and social patterns of this country.
. On national and religious co-existence as well as national security as far as Immigration and Emigration laws are concerned.
Meanwhile, answering to the query raised by a journalist on the attempt to sabotage the Vesak celebrations by certain groups,SLFP General Secretary Duminda Dissanayake requested the devotees to engage in religious observances this Vesak season without any fear.
“We should not be scared of extremism and we should eliminate these menace. He said those recent incidents were a disgrace to the country internationally,” Amaraweera said.
He further said there is a sinister fear-mongering campaign in the country to mislead the people with false rumors. Therefore, this year’s Vesak is most appropriate for spreading the message of peace and reconciliation, the need of the hour. Today, the Nation is at a crossroads, having opted for unity and peace instead of discord and rancor. We have the Herculean task of rebuilding the Nation ahead of us. And the Buddha Dhamma offers ample guidance for such a process of healing and rebuilding of trust among all our peoples.