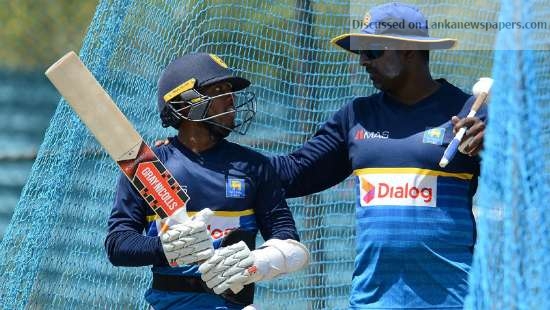 Sri Lanka Cricket (SLC) has given former Sri Lanka opening batsman Avishka Gunawardene the shock of his life as the 41-year-old has been demoted from his post as the head coach of the Sri Lanka ‘A’ team despite his successful record.
The post Mahela-Sangakkara era has been a painful one for the Sri Lanka cricket community, but the country’s ‘A’ team has reached new heights under the guidance of Gunawardene maintaining an unblemished record for the last couple of years that included tours to West Indies, England and Bangladesh.
In addition to that Gunawardene guided the Sri Lanka Emerging team to Asia Cup glory and also thrashed their counterparts from South Africa five-nil a few months ago.
During Gunawardene’s tenure as the head coach, nearly 20 players from the Sri Lanka ‘A’ team were promoted to the national team that includes the likes of Dhananjaya de Silva, Avishka Fernando, Dasun Shanaka, Kamindu Mendis, Angelo Perera, Vishwa Fernando and Asitha Fernando.
In fact the sources revealed that Gunawardene sat with the national selectors few days ago to select the Sri Lanka ‘A’ team which will tour India in May, only to receive a phone call hours later from one of the top officials of SLC informing of the demotion for absolutely no reasonable reason.
Thilan Samaraweera on the other hand was axed from his role as the batting coach of the national team after the country’s dismal form with the bat during his time with the team. Since then he was handed a coaching role in the High Performance Unit under Asanka Gurusinghe, without any specific assignment.
Samaraweera who is believed to be a close buddy of Sri Lanka national team’s head coach Chandika Hathurusingha has however been named as the head coach of Sri Lanka ‘A’ team out of nowhere in a very confusing move raising a few eyebrows given the sensational record of Gunawardene.
The sources also suggest that Samaraweera is set to be handed a very attractive package with his wages close to be at least five times higher than that of Gunawardene’s.
Meanwhile, Gunawardene who was all set to take the Sri Lanka ‘A’ team to India in May has now been demoted to the Sri Lanka Emerging team which means everything he has worked on with his players targeting the India ‘A’ series is now well and truly out of the window.
The ‘Daily Mirror’ learns that SLC had insisted on how the decision should not be branded as a ‘demotion,’ but when someone has to go from ‘A’ team to the Emerging team, that certainly cannot be termed a promotion.
Samaraweera was a remarkable Test cricketer for Sri Lanka and showed unbelievable courage to return to cricket following the Lahore terror attack in 2009. There is absolutely no doubt about Samaraweera’s coaching ability, but he has nothing to showcase in comparison to Gunawardene who has been very successful with the Sri Lanka ‘A’
team, to state the least.