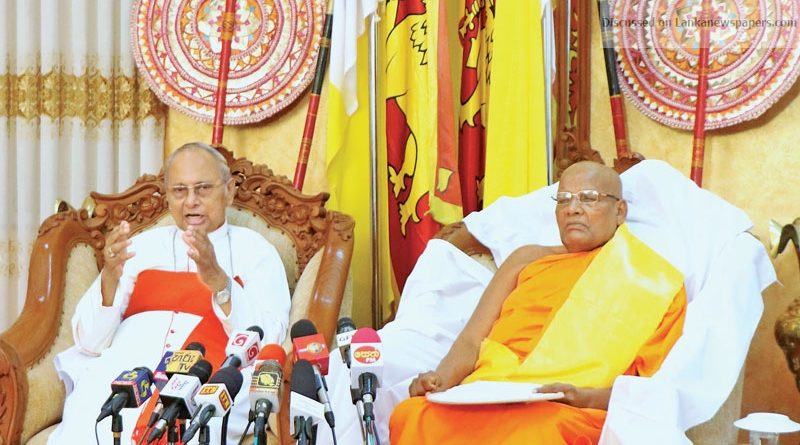 The clergy and the people are not happy about the manner in which the government is conducting investigations into the deadly Easter Sunday bombings, the Archbishop of Colombo His Eminence Malcolm Cardinal Ranjith and the Chancellor of the University of Sri Jayawardanepura Dr. Ittapana Dhammalankara Maha Nayake Thera said during a joint media briefing convened at Bishop’s House in Colombo yesterday.
“While all religious leaders have come together in unity during this difficult period, the politicians in the country are still divided and blaming each other while failing miserably in their responsibilities.
“The government should take this matter seriously and act responsibly. The example set by the people during this incident is exemplary. But sadly, we don’t see that in our politicians and they are still not taking this issue seriously. All they keep doing is issuing statements,” Dr. Ittapana Dhammalankara Maha Nayake Thera said. The Maha Nayake Thera said it was very important to uncover who was behind these attacks and for that these investigations need to be carried out in a more organised manner.
The lives of over 250 persons was lost and hundreds injured, while the cost of the damage caused is yet to be determined. “In such a backdrop we are not satisfied that the investigations are being carried out in the manner it should. We don’t see the politicians joining together in this tragedy in order to collectively take measures to address this issue. The government has failed to even appoint vital officials to key positions. Therefore, I stress the need for the government to take this issue seriously and act responsibly and urgently. This is their prime duty,” the Maha Nayake stressed.
“The people gave the government the opportunity to take the required measures to deal with this situation by not getting onto the streets and taking matters into their own hands. The people united setting a good example to the politicians. We have been discussing the situation regularly with the Rev. Cardinal and other religious leaders, but we cannot be satisfied with the progress made and the manner in which the government is handling the situation. Hence, the government should take action which is satisfactory to the people. My stand is that the government should join with other political parties and tackle this matter together.
There is no point is just issuing statements. The government must create an environment for the people to live in peace,” Dr. Ittapana Dhammalankara Maha Nayake Thera said.
Archbishop of Colombo His Eminence Malcolm Cardinal Ranjith fully agreeing with the views of the Ven. Mahanayake said that the people are yet to feel that the country’s politicians are joining hands to address this issue that devastated the country. “The people are somewhat annoyed and we can see that these politicians are still trying to score points without uniting at this time of need. Instead of talking of the past and finding fault with each other, the political leaders should unite and come up with a plan to address this threat to the nation. Hence, we urge the President, Prime Minister and Opposition Leader to join hands and come up with a common policy regarding the security of the country. Right now we don’t see the investigations being done with proper direction,” Archbishop Malcolm Cardinal Ranjith said.
Hence, he said so much of explosive and weapons were discovered based mainly on tip-offs received. As such if search operations were carried out systematically, the security forces could have found a lot more, he said.
The Archbishop was of the view that it is not recommended for investigations to be handed over to just one institution and with the declaration of the state of Emergency, he suggested that the Police, Army, STF, Navy, Air Force and all security divisions be involved in the search operations.
“They need to uncover how so much explosives were brought into the country. If any Customs, Police or any other government official was involved in assisting them, they should be dealt with. It is simply not enough to be making arrests daily and be satisfied that the threat is over. There are many functions on the calendar such as Vesak. Hence, the people must be assured that they are safe,” the Archbishop said. The two religious leaders also suggested that after questioning, if the suspects are to be released, then their passports should be impounded. “Otherwise these suspects will definitely leave the country. We are suspicious whether the real leaders who were behind these attacks have already left the country,” the Archbishop Malcolm Cardinal Ranjith said. They said that the President keeps appointing commissions to investigate, but nothing constructive has come out of these commissions. “Innocent people lost their lives and their sacrifice should not be in vain. Even if any politician is involved in this attack they should be arrested. We cannot be cheating the people with false promises every day. If the government fails to take adequate measures to address our concerns, we will be forced to join the people in taking to the streets,” Archbishop Malcolm Cardinal Ranjith warned.
Dr. Ittapana Dhammalankara Maha Nayake Thera said the people had so far not taken the law into their own hands, but warned the government not to test the patience of the people.
“If in any way another incident occurred, then the country will be plunged into chaos. Therefore, I urge the government to not allow the situation to get out of hand and to unite and take measures to resolve this matter.”
The two religious leaders urged the government not to allow politics to interfere in the country’s security. The Cardinal also said that churches will be open for Holy Mass on May 5. However, all Masses will not be held and only a limited number of Masses will be held on this day.
Meanwhile, all schools are scheduled to open on May 6. He said if they feel that situation is not improved, they will decide to keep the Catholic school closed until further notice.