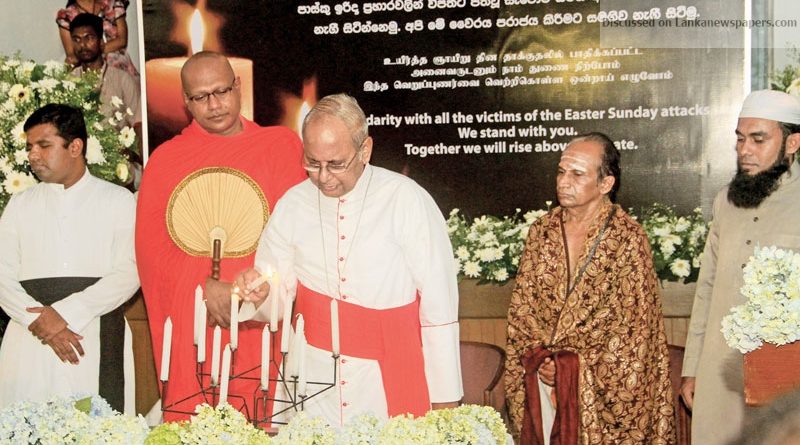 A solemn but dignified ceremony was held at the Lake House premises last evening to commemorate those who died during the Easter Sunday carnage inflicted by terrorists. Archbishop of Colombo His Eminence Malcolm Cardinal Ranjith, Most Ven. Dr. Kirinde Assaji Thera of the Gangaramaya temple, Shri Shankara Narayana Kurukkal of Shri Mayurapathy Kovil and Nusrath Nawfel Moulavi joined together to light a candle in memory of the departed souls. Picture by Sudam Gunasinghe
Archbishop of Colombo, His Eminence Malcolm Cardinal Ranjith yesterday emphasized on the importance of all Sri Lankans joining together irrespective of differences to protect harmony and peace in the wake of the Easter Sunday terrorist attacks.
“We all should get-together to ensure that these incidents do not in any way damage the harmony and peace that exists between us: Christians, Buddhists, Hindus and Muslims,” he said joining the candle lighting ceremony organized by “Lake House” yesterday night in remembrance of the victims of the Easter Sunday terrorist attacks.
The Associated Newspapers of Ceylon Limited (ANCL) yesterday night switched off the lights at its headquarters “Lake House” and held a candle lighting ceremony in remembrance of the victims in the Easter Sunday terrorist attacks.
The Archbishop of Colombo said that what happened is not something political or religious, but the result of actions by some misguided people.
“The attackers involved in Sunday’s incidents are a group of young people who have been misled by some extremist religious and political groups. We should not allow differences, divisions or thoughts of revenge to creep in at this difficult moment. We should ensure that Sri Lanka remains a multi-religious and united country by joining hands, ”he added.
Venerable Kirinde Assaji Thera of the Hunupitiya Gangaramaya Temple, addressing the ceremony highlighted that all religious leaders have a responsibility at this critical moment to maintain harmony and peace in the country.
“The government alone cannot achieve this task. The religious leaders too have a role to play,” he said.
The Venerable Thera also commended the efforts made by Archbishop of Colombo His Eminence Malcolm Cardinal Ranjith to maintain peace and harmony following Sunday’s attack mainly targeting Churches and hotels.
Addressing the gathering Kurukkal Shankar Narayana Aiyyar and Maulavi Nawfar also stressed the need for maintaining religious harmony and the peace in the country.
They also condemned the attacks which took place in several areas including religious places and offered condolences to the relatives of the victims.
Religious leaders, Management and staff of ‘Lake House’ attended yesterday’s ceremony.