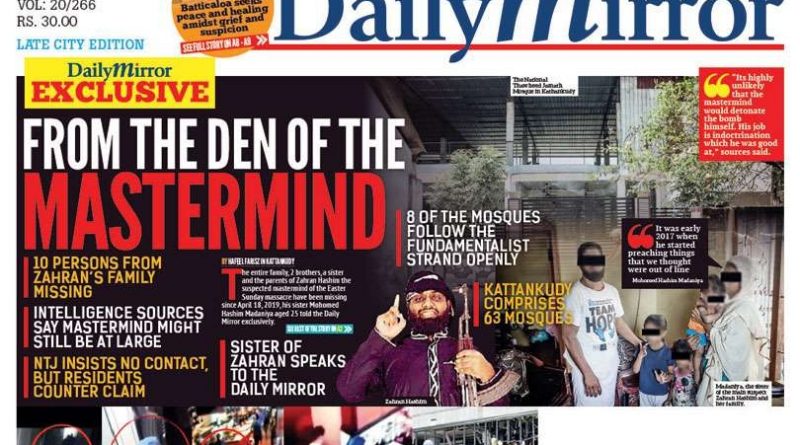 The entire family, 2 brothers, a sister and the parents of Zahran Hashim the suspected mastermind of the Easter Sunday massacre have been missing since April 18, 2019, his sister Mohomed Hashim Madaniya aged 25 told the Daily Mirror exclusively.
“ I went and gave food to my parents and my sisters family on April 18, and haven’t heard from them since” she told us, at her house in Kattankudy located around the mosque of National Thawheed Jamath in Kattankudy.
Providing exclusive access and details of a chilling tail of radicalization of which the sister insists she had been against, and members of the mosque completely dissociating themself with, the Daily Mirror was told that Hashim was a gifted orator and a loving family man until his “sudden disappearance”
The family included five children with Zahran Hashim being the oldest (33) he is married to Mohomed Haadiya (23) a resident of Kekenuwella, Kurunegala and is the father of two children aged a boy aged eight and a girl aged four.
His brother Mohomed Zeyin Hashim (30) is married to Abdul Gafoor Afrin (23) and has two children a boy aged 5 and a girl aged 3. The third was Mohomed Rilwan Hashim (28) Nafha (20) and is the father of two children aged 5 years and the other a six month old boy.
The remaining sister Mohomed Yaseera Hashim (20) was married to Mohomed Rishad (22) and is the mother of a boy aged one year, all of whom have left without a trace.