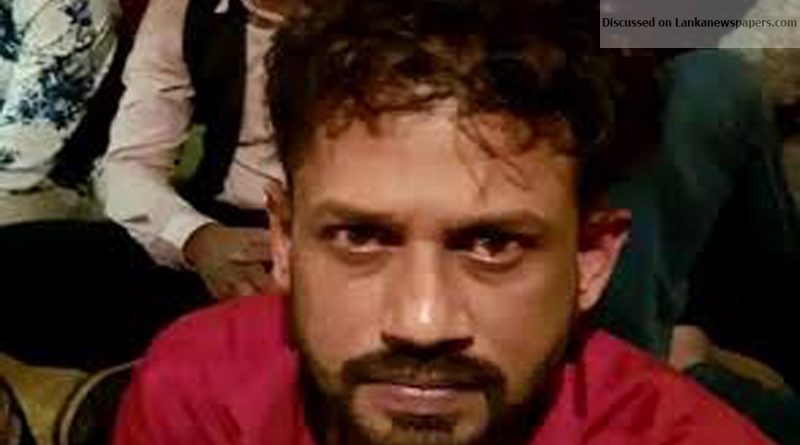 Another six persons who were arrested along with Makandure Madhush in Dubai were deported, arrived in the country around 4.45 am last morning. They arrived on board UL226 and were taken into custody by the BIA Crimes Investigation Unit.
Police Spokesman SP Ruwan Gunasekara said among them were Madush’s uncle Rupadasa Simon Hewage and another relative Nilan Romesh Samarasinghe.
According to the police, it was Nilan Romesh Samarasinghe who had received singer Amal Perera and group at the Dubai Airport and taken them to the hotel for accommodation.
According to SP Gunasekara, the others who had arrived in the country are Mohomed Rizan Mohomed Bathurdeen, Mahawatte Gayan Buddhima Perera, Mohomed Hibry Mohamed Jabir and Suresh Wasantha Ranasinghe.
The suspects who arrived in the country yesterday are Mohomed Rishan Mohomed Bathurdeen 25, a resident of Wellampitiya. He had left for Dubai on January 30, 2013 on a resident visa. He had returned to the country in October 2018 and again on October 26, he had left for Dubai.
The second suspect is Maosage Dayan Buddima Perera Seneviratne 39, a resident of Ahungalla. On October 01, 2018 he had left for Dubai on a resident visa. According to investigations carried out so far, he is an Air Force deserter and had been involved in several murders.The CID is currently interrogating the suspect.
The third suspect Mohomed Jabir Mohomed Hibry (42) is a resident of Colombo 10.He had gone to Dubai on a visitor visa on February 3, 2019.
The fourth suspect is Ranasinghe Suresh Wasantha (44) alias Velupillai Raghavan Suresh Wasantha, a resident of Wellampitiya. He had gone to Dubai on a visitor visa on February 3,2019.
The fifth suspect is Merinnage Simon Hewage Rupadasa (53) a resident of Sooriyawewa. He had left the country on January 31 on a visitor visa. He is an uncle of Makandure Madhush. He is Madhush’s father’s younger brother.
The sixth suspect is Nilan Romesh Samarasinghe (32), a resident of Kamburupitiya. He had left the country on March 25, 2018 and he was in Dubai on a resident visa. He is a cousin of Makandure Madhush. The CID had earlier arrested him for several arms cases in 2010. In 2018 on March 23 he is a suspect in the theft of a van worth Rs 6.5 million. The Matara courts has issued a warrant against him. In 2005, Madhush had been arrested for the robbery of two finance companies and Nilan had signed as a guarantor for his bail. There is a warrant issued against both.
The Police Spokesman said that the intelligence units and the CID are currently interrogating the suspects.
So far 21 persons who were arrested along with Makandure Madush in Dubai have been deported. Among them eight suspects were released after interrogation. Kanjipani Imran is still in custody and another six have been sent to the relevant courts where there are warrants issued against them.