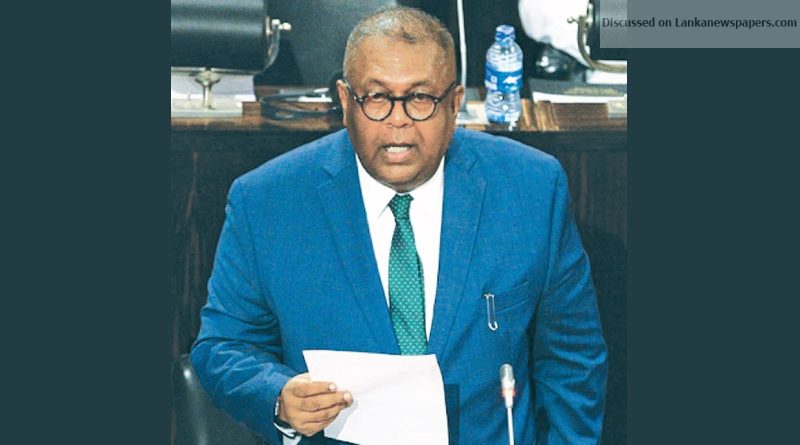 The Government yesterday rolled out sweeping incentives for all social segments of the country presenting an all-inclusive Budget for the year 2019.

The Budget also included a series of new proposals to meet revenue targets and successfully confront the fiscal challenges.

Finance Minister Mangala Samaraweera, delivering the 2019 Budget speech themed ‘Focusing on Empowering the People and Nurturing the Poor’, announced that all public servants would receive an additional allowance of Rs.2,500 from July 1, and that a pension adjustment would be made on the same day to remove all pension anomalies who retired before 2016. Despite the economic woes, the Government has made an additional allocation of Rs 40 billion for the increase of public servants’ allowance and Rs.12 billion to rectify the pension anomalies.

In his two hour and fifteen minutes long Budget Speech, the minister also reminded the House that the salaries of public servants have been increased by 107 percent during the period of the current government.

Another salient feature in the Budget is the proposal to give full scholarships to top ranked GCE AL students for overseas study in prestigious international universities such as Harvard, MIT, Oxford, Cambridge etc. Fourteen will be selected for the programme this year and it will be increased to 28 next year. They will be bonded for 10 years upon return to serve in Sri Lanka.

At the outset of the Budget Speech, Samaraweera noted that the economic and political stability has been restored following the 51 day political crisis and expressed his dismay that the first Cabinet paper of the purported government was to scrap the “Enterprise Sri Lanka” programme. Observing that the programme was resumed soon after the Government was back on track, he said the Budget 2019 has given special attention to strengthen it further.

“The Enterprise Sri Lanka loan scheme will be spread across the country. Rs 500 million have been allocated for the programme and Rs 60 billion already disbursed to over 30,000 recipients. Action will be taken against bank officers who discourage Small and Medium Enterprises,” said the minister adding that a hotline ‘1925’ is available to lodge complaints.

He added that “Enterprise Sri Lanka” will be expanded to provide concessionary loans to young entrepreneurs.

Minister Samaraweera observed that only 30 percent of women represent the labour market of the country though 50 percent of university students are female, proposed amending labour laws to allow women to work from home and have flexible working hours. He also stressed the need for more women in decision-making positions in the business sector. He added that tax concessions would be provided for companies that grant three months of maternity leave. The Budget encourages firms with over 250 workers to provide day care facilities for children of workers.

With reference to combating the drug menace, the Minister proposed to establish special rehabilitation camps in Weerawila and Ambepussa for drug addicts. Females in prisons will be given the opportunity to learn arts and crafts at a special facility in Dompe with an allocation of Rs 50 million.

The Government also proposed a series of new loan schemes in the Budget 2019. It proposed to introduce a housing loan scheme ‘Home Sweet Home’ for newly wedded couples to repay within 25 years at a 6 percent interest rate. It will be Rs 10million concessionary loan for middle income earners to buy their first house. He added that ‘Dream Home’ loans would be introduced for registered migrant workers to obtain Rs.10 million with two years grace period to be paid within 15 years. Students who could not gain admission into universities after the A-L exam will be provided ‘My Future’ interest free loan scheme upto Rs 1.1 million with a two year grace period to enrol at non-state universities.

The Budget also proposed to allocate Rs.600 million to widen the ‘1990 Suwaseriya Ambulance Service’ throughout the country and to improve its parking stations.

With reference to foreign investments, the minister said foreign companies would not be allowed to bid without establishing a joint venture with a local company. To support the Property Development Sector, the Government proposed to grant residential visas for three years to foreign nationals who invest USD 400,000 or more in condominiums.Cess on imported construction material will be reduced by 30percent.

The Minister further said that Rs 48 billion has been allocated for the Gamperaliya development programme.The minister also commented that an expressway to Jaffna would be completed before the tenure of the Government is over. He said that Outer Circular Highway construction will be completed this year and the Ruwanpura Expressway construction will commence this year.

The revenue proposals of the Budget included the introduction of 3.5 percent of the Nation Building Tax in place of existing Stamp duty on all foreign payments made using any Credit Cards and Debit Cards.This will be made effective from June 1. Expressway rush hour toll fee has been increased by Rs. 100 from April 1.

According to the budgetary proposals, personalised vehicle number plates better known as “Vanity Plates” can be obtained for Rs 1 million each.

Tax imposed on cigarettes will be increased from midnight yesterday while the NBT to be imposed on cigarettes from July 1. As a result, the Cigarette price will be increased by 5 rupees from mid night yesterday. The Budget also proposes to increase the production tax on hard liquor by Rs 63 per 750 ml bottle and beer by Rs 9 per 330 ml can. A casino entrance fee of USD 50 per person will be charged with effect from June 1.The licence fee for casinos has been doubled from Rs 200 million to Rs 400 million.

This is the fifth Budget by the current government and the 73rd national budget of Sri Lanka.

The Budget debate will commence from today and the final vote will be taken up on April 5.