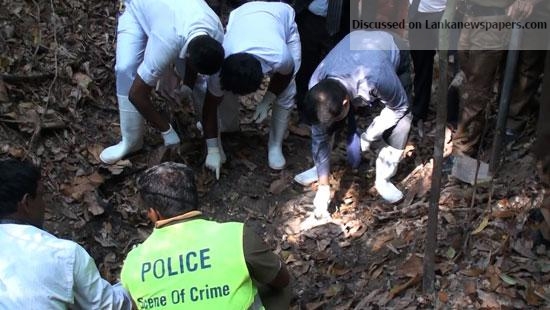 The two businessmen who were reported to have gone missing from Boossa in Rathgama have been killed at Akmeemana and their bodies burnt at the Kanumuldeniya-Megdagamgoda Forest Reserve in Walasmulla, the police revealed today.

Bone fragments and teeth suspected to be those of the two businessmen were recovered from the forest reserve and inspected by the Walasmulla Chief Magistrate Suranga Munasinghe.

Based on the information obtained from the suspects, who were arrested in connection with the abduction, the CID officials recovered the teeth and bone fragments from the bed of a dried-up stream inside the reserve.

The two businessmen, 33-year-old Manjula Asela Kumara and 31-year-old Rasin Chinthaka were abducted on January 23 by some unidentified men who were clad in what appeared to be police uniform.

A police Inspector and a sub inspector attached to the Southern Province Special Crime Investigation Unit were arrested in this connection.