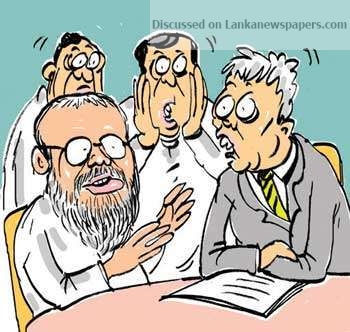 he national unity government move has taken centre-stage again.
The motive behind this move is to accommodate more ambitious ones in the top team.
In the recent past, an effort was made to form a national unity regime by coalescing with a one-man party from the East. This rather ludicrous effort had to be abandoned when strong objections arose from within.
Thereafter, they sent for Douggie from the North.  Nowadays, a loyalist of the former strongman, Douggie having agreed to enter negotiations had placed many demands on the table. One of the demands was that he be placed in charge of the development activity in the North now being handled by Thiran. And the talks had ended in smoke with the man insisting on the pound of flesh.
Having realized that Douggie had not been serious about throwing in his lot with the Greens from the very outset, protagonists of the national unity move are busy looking for another alternative.