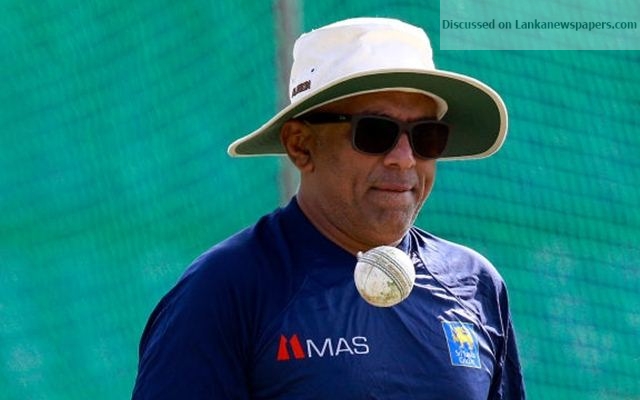 Sri Lankan coach Chandika Hathurusingha will have no longer have a role in choosing the national cricket team, either at home or on tour.

A directive has been issued by the Sports Minister Harin Fernando to the selection committee, headed by Asantha De Mel, that the team for the matches will now be selected by the captain, manager and selectors and that the majority opinions of the new management (selectors, captain and team manager) will prevail.

A one-page letter, which was read to the reporter over the phone by a highly placed-source privy to this latest development, was signed by the Competent Authority, Chulananda Perera, and sent to the team management currently in Australia, and copied to the national selectors.

“This new arrangement has come with immediate effect and the copy of this letter is already sent to the team management in Australia. Therefore, the final XI for the 2nd Test match commencing in Canberra from February 1, will be selected by this newly formed management and the coach will to be involved in the process”, a highly placed source said to this paper.

Interestingly, the power of involving the coach on selection matters was given by the previous establishment. “There is no such provision in the SLC constitution,” the source claimed.

Brendon Kuruppu, Hemantha Wickramaratne and Chaminda Mendis are also in the selection committee. It will be interesting to see whether the inputs would be sought from the coach as it is a practice with other national coaches and again it would not be a surprise if Hathurusingha tenders his resignation anytime soon. It is also learnt that those who in Australia for the two-test series, who are selected for the South Africa tour will travel straight without returning to the island, while any new additions will be accompanied by Kuruppu who will be the selector on tour.