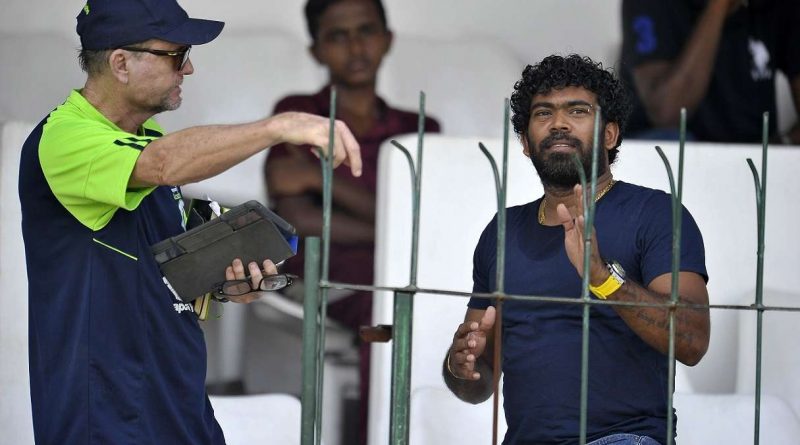 He had just overseen Surrey’s return to the top tier in English county championships when he was invited by his former employer–Sri Lanka Cricket (SLC)–to come on board. It was a tough call for Graham Ford. But the opportunity to return to international level coaching was too good to reject.

Ford had early reservations, given the volatile state of affairs in the island’s cricket board. But he decided to give it a try on the promise of a lucrative offer. Sri Lanka’s national team had seen some high profile retirements and he took up the challenge of rebuilding it. Had he known that rampant interference would soon force him to abandon ship, he would not have returned, no matter how good the package.

“I was involved with Surrey,” Ford recounted, in an exclusive interview with the Sunday Times this week. “We were doing really well. The team had made huge progress. I enjoyed everybody I was working with. They had some great players and great coaches. So if I knew what was going to happen, I wouldn’t have accepted to be really honest.”

The 58-year-old former South African first class cricketer is currently in Sri Lanka studying the actions of the 15 men in Irish shirts playing against Sri Lanka A in an unofficial Test and ODI series.  He is head-hunting for the next generation of Irish cricketers to replace ageing players in the national team. It’s a challenge he loves.

Being the gentleman that he is, Ford doesn’t point fingers at individuals: “I really don’t want to go into the details of that incident. Obviously, I was the Head Coach and there were a few changes that took place. So, when you can’t have the same inputs which I thought I am going to have when I took over, I had to take a call and that’s pretty much about it. No issues with anybody.”

After returning from Australia in March 2017, having won a T20 series against the men from Down Under, Sri Lanka were gearing up to host Bangladesh at home when the Board decided to bring in Asanka Gurusinha as Cricket Manager, a position with wide-ranging of powers. This undermined the job of the Head Coach. It was something Ford could not tolerate for long. He relinquished his duties soon after Sri Lanka made a first round exit from the Champions Trophy in England.

Ford’s first stint(2012-2014) was a successful one. Not because he waved a magic wand and turned the team’s fortunes around. It was because he had group of world class cricketers of the calibre of Kumar Sangakkara, Mahela Jayawardena, TM Dilshan and Lasith Malinga to work with. It was a luxury he did not enjoy upon his return in 2016.

“The success we had at that time was not purely due to my presence but because of those cricketers,” he admits. “We could actually match up to any team in the world. Missing them, and some exciting young players coming into the side the second time around…I felt they needed time to develop.”

After having shown their potential when Sri Lanka beat Australia at home in a Test series, of those young talents were now playing “exceptionally well”, Ford said. He named Kusal Mendis, Dananjaya de Silva, Niroshan Dickwella and Dimuth Karunaratne.

Ford is an uncomplicated coach who believes in hard work and has repeatedly urged cricket administrators, fans and media to be patient with the players without writing them off when the going gets tough. He stands by the same mantra today. Part of the responsibility for the current state of Sri Lankan cricket, he feels, rests with national Cricket Selectors for their policy of chopping and changing.

“Most teams go through these phases and they have to regroup and rebuild,” he said. “Australia is in a bit of crisis now. You can’t just pick players out of domestic cricket and expect them to be Sangakkaras next day. You need to have some consistency in selection and the results will happen.”

“I think, for a while, the selections were not consistent and that’s where the issue is,” he continued.  “There were instances where Kusal Mendis was dropped, Dananjaya de Silva was dropped. But with the talent they showed back as young lads, they should be just automatic picks all the time.”

Sri Lanka has had so many Captains in the last two years that they could field a Captain’s team at a six-a-side tournament . The Selectors were changed at least three times. There were at least three Head Coaches taking charge of the national team at different intervals.

Despite the present predicament, Ford urges fans not to write the team off as they still have what it takes to be champions. “With the batting they’ve got, they can beat anybody,” he insisted. “If you look at the last Champions Trophy at the Oval, they beat India, chasing over  300 runs, in a brilliant run chase . They have the potential to beat anybody. Even in that tournament, unfortunately, they dropped catches in the Pakistan game. It was one of those things that happens in cricket. If not for that, we could have won that tournament, who knows. ”

“But in the bowling side they lacked the Muralis and Ajantha Mendises,” he said.  “I don’t think Sri Lanka quite have the quality of bowling they have had over the years. Lasith is still playing but he is not the weapon he was back then. If the bowling can improve a little bit, I think the future is bright. They can win games with their batting unit. If they can find a mystery spinner, the problems, particularly in the middle overs… I think they are in good shape.”

Ford, who was South Africa’s Head Coach when the Hansie Cronje match-fixing scandal rocked the cricketing world, says it would hurt him to learn if any of the matches he was involved in were fixed.

“If something has really gone on, I really pray and hope that the people who were involved are found out and get punished for it,” he said. “At the same time, if they have not been involved, clear them. I would be hurt if I found out that some of the matches I was involved in were fixed by people doing whatever they are asked to do by the book makers. I would be very hurt.”

Ford was in charge of the national team when Sri Lanka conceded a shock 2-3 series loss to Zimbabwe at home in 2017, a series which is under investigation by the International Cricket Council (ICC) with a view to seeing whether the results was premeditated. Ford says he did not suspect foul play.

“I never suspected them,” he reiterated. “I was actually involved with South African cricket when the Hansie Cronje thing happened and I never suspected him at all. Maybe I am just one of those guys who don’t see them doing it.”

Ireland need to improve depth to be competitive

Born in Natal, in South Africa, Ford played seven games for the province’s ‘B’ team before taking over as Head Coach there.  His team won limited-over and first class trophies. He later became Assistant to late Bob Woolmer with the national side. After the 1999 World Cup, he took over South African and won eight of his 11 series but back-to-back defeats to Australia cost him his job in 2002.

Since then, he has coached at Kent before heading to Sri Lanka in 2012 and then Surrey before returning Sri Lanka in 2016.  The hard work has now started with Irish cricket, a country that has little interest in cricket. “This is probably the biggest challenge in my coaching career,” Ford readily admits.

Cricket in Ireland is small. The playing population and fan bases are also small. As a result, finances and facilities are less than what you get around the world. Everyone in the system is working hard to improve these circumstances.

Ireland Cricket  does not have their own grass nets and don’t own a ground. They are building a high performance center but it is far from complete. Much of the time, particularly in winter, there is no outdoor practice. They hire a center sometimes but the rest of the world has their own facilities.  It’s a significant disadvantage but has been identified and there are plans to build a facility, which will take time and money.

“Even though Irish cricket has these disadvantages, they have got out on the field and created problems for bigger oppositions,” he said. “Hopefully, we can continue with that. The big nations are getting better and better. We’re going to be playing them more often and we  got to find a way to improve our cricket, improve our depth. Because the more you play, the more players you need owing to injuries and fatigue, etc.”

Unlike in Sri Lanka, where 24 teams are playing in the first class tournament, Ireland has just three teams who plays just 22 days of domestic cricket per season.