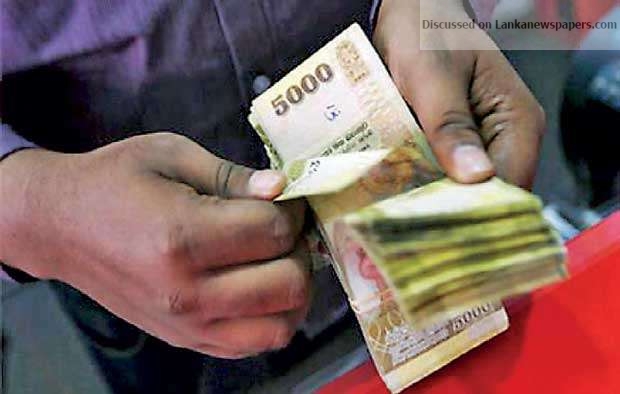 (Colombo) REUTERS: Sri Lanka’s rupee closed weaker yesterday due to dollar demand from importers, while stocks fell to an eight-week closing low amid concerns over debt repayment by the government.
The rupee closed at 182.00/20 per dollar, compared with 181.75/90 in the previous session, market sources said. On Jan. 3, the rupee fell to an all-time low of 183.00 against the dollar.
The currency has depreciated 0.3 percent so far this year, Refinitiv data showed.
It fell 19 percent in 2018, making it one of the worst-performing currencies in Asia, according to Refinitiv data, due to heavy foreign outflows.
Worries over heavy debt repayment after a 51-day political crisis have dented investor sentiment as the county is struggling to repay its foreign loans, with a record US $5.9 billion due this year including US $2.6 billion in the first three months.
The Central Bank Governor last week said around US $5 billion borrowing in the pipeline could help debt repayments.
The International Monetary Fund last week said it would resume discussions for further disbursal of part of a US $1.5 billion loan amid investor worries of heavy debt repayments.

The rupee has declined 4.9 percent since a political crisis started in October. That crisis had dented investor sentiment and delayed Sri Lanka’s borrowing plans.
A series of credit rating downgrades have made it harder for Sri Lanka to borrow as it faces record high repayments.
The Colombo Stock Index ended 0.24 percent weaker at 5,944.17 yesterday. The benchmark index lost 5 percent in 2018.
Turnover was Rs.206.6 million (US$1.14 million), well below last year’s daily average of Rs. 834 million.
Foreign investors were net buyers for the first time in 11 sessions, buying a net Rs.18.7 million worth of shares. But they have been net sellers of Rs.2.4 billion worth of stocks so far this year and Rs.5.8 billion since the political crisis began on Oct. 26.
The bond market saw outflows of Rs.86.7 billion between Oct. 25 and Jan. 16, the latest Central Bank data showed.