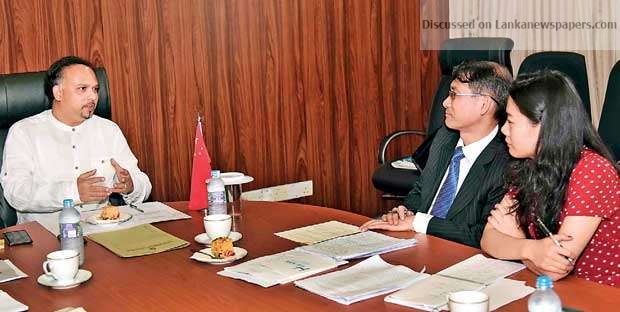 China is looking to set up a specialised free trade zone for rubber-based value added exports in Sri Lanka by partnering with private sector rubber manufactures, exporters and planters including Regional Plantation Companies (RPCs).
A high-powered Chinese delegation led by the Deputy Governor of China’s Hainan Province and former Chinese Ministry of Commerce spokesperson Shen Danyang  and other Chinese State officials had discussions with Plantation Industries Minister Navin Dissanayake and other top ministry officials at the ministry premises in Colombo yesterday.
A top Chinese firm which has a US $4 billion market capitalisation in rubber value chain also took a part in the meeting.
“They want to get involved in all value chain activities from planting to value added manufacturing to exports. They prefer joint ventures with private sector lines. They want the government to facilitate the process of bringing the private sector together, and the private sector joint ventures can access the funds from the Chinese government,” a top ministry official told Mirror Business.
The Media Unit of Ministry of Plantation Industries stated that the project will commence following Cabinet approval.
The two parties yesterday reached an agreement to appoint project coordinators from both sides and set-up a small project coordination unit to work out the details and Dissanayake was invited by Chinese authorities for an official visit to China to sign an agreement to formalise the project.
“Initially, the Chinese government will provide a grant fund to work out the project details which would cover the pre-project arrangements,” the ministry official said. The Chinese delegation has requested long-term access to lands and tax concessions, given the risk factors involved with the project. However, the ministry official said that these conditions are negotiable.
The Plantation Ministry noted that these projects wouldn’t burden the government coffers and will boost export revenue from rubber-based exports significantly.
However, according to sources, it is likely to take 1-2 years to get the real projects off the ground.
In terms of long-term land access for supply of natural rubber, the ministry forwarded a proposal to sublease RPCs which are not interested in investing in the rubber plantation anymore.
“The RPCs who don’t want to invest in rubber or who says they don’t have funds and want to venture into oil palm, can easily collaborate with the Chinese firms,” the Ministry official stated.
Three RPCs have already indicated their interest in subleasing, and they are likely to come forward and design their own project models with Chinese parties.
Based on the project models, the government will approve the subleasing agreements with Chinese parties, where the existing leasing can also be lengthened.
“The government can always extend the lease agreements, depending on the negotiations and how good the agreement is for the country and plantations workers,” the ministry official said.
Prior to the political turmoil which prevailed for almost two months towards the latter part of last year, the Plantation Ministry engaged in discussions with the Chinese government and the minister said Sinoshine Group was considering long-term investments in Sri Lanka’s rubber production value chains linking to China’s Belt and Road initiative.
Disaanayake also earlier announced that US$ 30-40 million investments can be expected from China. However, the ministry officials noted that the amount is a fraction of the overall investments planned.
Meanwhile, the Chinese delegation is expected to hold talks with Minister of Development Strategies and International Trade Malik Samarawickrama and Governors of Western and Southern provinces during their stay.