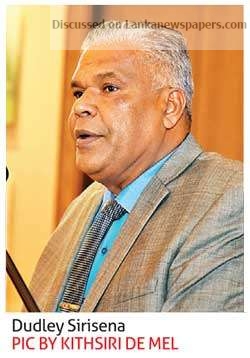 The brother of President Maithripala Sirisena and Araliya Group of Companies Chairman Dudley Sirisena yesterday announced his plans to launch an anti-corruption organisation by joining hands with scholars, professionals, media and business community aiming to put a stop to corrupt activities carried out by politicians and officials and to direct the government on the path of good governance to accelerate the development work in the country.
Addressing an MoU signing ceremony of Araliya Group in Colombo, yesterday, Sirisena announced that following the elections this year, under the leadership of President Sirisena, he is planning to create an organisation, which is not linked to the government, to promote good governance practices and to influence the government, as the country has reached a boiling point, due to the sustained corruption.
He, in particular, blamed the politicians and officials who attended the top schools in Colombo for ruining the country’s economy.
“The people who went to top schools in Colombo were responsible for destroying this country. All these people need to be sent to schools in Polonnaruwa first,” he said.
Sirisena also criticised the corrupt officials and politicians who were hindering foreign investors coming into Sri Lanka by demanding bribes, which ranges between 5 percent and 50 percent of the investments.

“There have been certain individuals who were demanding 5 percent, 10 percent, 15 percent, 20 percent and even 50 percent from foreign investors for their investments during past years. We will definitely implement a programme against these corrupt activities carried out by corrupt individuals this year,” he stressed.
Sirisena claimed that none of the Board of Investment (BOI) projects signed within last one to two years were completed, except for the projects carried out by his company. He said he would reveal these corrupt activities via the media in coming months, while urging for the support of the media. Sirisena also revealed that five well-known figures in Sri Lanka’s business community have invested US $ 673 million recently in Indonesia alone, as the conditions in the country have become unviable for local businesses.
“When I visited Indonesia seven to eight months ago, I met the Sri Lankan ambassador to Indonesia and he revealed to me that five well-known Sri Lankan businessmen have invested US $ 673 million in Indonesia, which was more than the US $ 500 million spent by the Central Bank in defending the rupee against the dollar during the past few months.
Why did these people go there? Because of raw materials, labour cost, tax issues, etc.” he said.
Sirisena insisted that the government must focus on improving the business environment in order to retain local businesses moving their investments out of the country.
“We need to review the benefits of these investments made in Indonesia and we need to take the necessary measures to avoid funds flowing out of the country. We need to create the background and a conducive environment for the business community to invest in Sri Lanka,” he added.