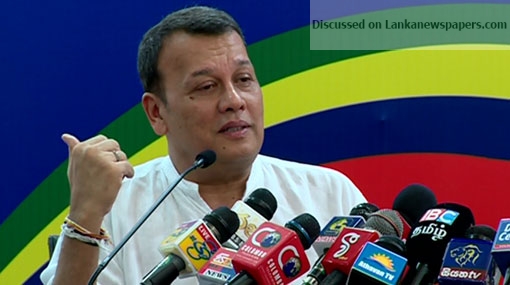 President Maithripala Sirisena will inform Speaker Karu Jayasuriya this week of the need to expedite the process to pass the proposed amendments to the Bribery and Corruption Act in Parliament, a spokesman for the SLFP said.

The President has said he is determined to bring to book those who have been involved in financial crimes in the recent past including those in the private sector, SLFP Spokesman Mahinda Samarasinghe said.

He added that President Sirisena intends to ensure that the law takes its course to cover all corrupt politicians and officials of the private and state sector before the expiry of his term of office in January 2020.

Addressing the weekly news briefing of the SLFP at the party office, Mr. Samarasinghe said the amendments to the Commission to Investigate Allegations of Bribery or Corruption (CIABOC) Act tabled in Parliament in mid-2018 have been unusually and incomprehensibly delayed. President Sirisena is worried about this, he said.

“The SLFP and the joint opposition have done their part to pass those amendments in Parliament. But the amendments have been remained on the order paper for several months for unknown reasons despite the fact that all stakeholders for the prevention of financial crimes and bribery want to pass it as early as possible. That is why President intends to write to Speaker Jayasuriya, asking to expedite the process to pass the amendments,” Mr. Samarasinghe said.

The SLFP believes that party leaders will decide on an early date for the debate after President Sirisena’s missive to Speaker Jayasuriya shortly, he noted.

After the amendments are made, the CIABOC will have the powers to consult the Attorney General for advice in any legal matter when needed and the minimum fine on conviction will be increased to Rs.100, 000 from the current Rs.1, 000.