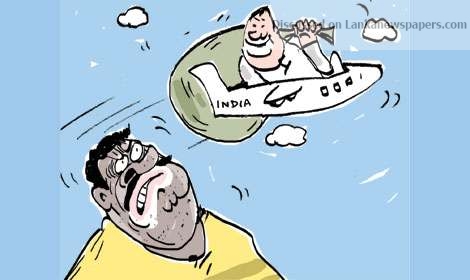 This businessman from the neighbouring country came here eyeing a big Ministry contract.

As per the prior arrangement, he met a political authority from the upcountry and having the deal wrapped he offered a wad of greenbacks to the latter.
Waving off the money, he told the businessman: “It is my acolyte who is going to handle the entire job on my behalf. Therefore, you had better give this money to him!”
The politico had already briefed the acolyte on his role in the affair -to receive the money and pass that back to him.
The acolyte later duly received the greenbacks and promised the businessman to do the needful.
However, the man pocketed the entire amount himself without passing it back to the political authority.
The political authority was livid that the acolyte played him for a sucker and decided to teach him a lesson.
He offered the acolyte a holiday in the neighbouring country and made a few secret arrangements with some unsavoury parties in that country pally with him. Unsuspecting acolyte happily left for the neighbouring to enjoy the ‘godsend’ holiday.
The acolyte once in the neighbouring country first lost his passport and other travel documents and found himself stranded. The worst was yet to happen. He was beaten up by a gang of goons.
Later by an unexpected stroke of luck, the acolyte met a compatriot who took pity on him and helped him to get a temporary passbook. Later, he poured out his heart to the compatriot who came to his rescue in his hour of need.