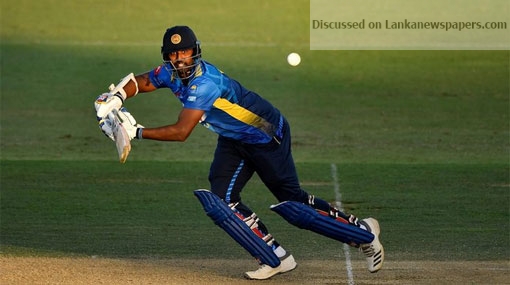 Thisara Perera scored a quickfire 140 off 74 balls but it wasn’t enough in the end as New Zealand sealed a 21-run victory in the second ODI at the Bay Oval.

The win helped home side take an unassailable 2-0 lead in the three-match series but it was not before an almighty scare, thanks to the Thisara blitzkrieg.

The visitors looked dead and buried at 128 for 7 in the 27th over, before Thisara started to open up his shoulders. New Zealand leg-spinner Ish Sodhi had run through the Lankan middle-order, claiming three for 35 in nine overs but Thisara began his assault by claiming 20 runs off Sodhi’s final over with two sixes, completing his fifty in the over off 28 balls.

The big all-rounder took another 29 balls to complete his maiden ODI ton, studded with seven sixes and eight fours. He gave Neesham some of his medicine back, hammering the Kiwi all-rounder for two sixes in his 7th over and then smashing four sixes in Tim Southee’s eighth over — the 46th off the innings.

But apart from Thisara, opener Danushka Gunathilaka was the only Sri Lankan batsman to score anything of note with his 71 off 73 balls.

Earlier, All-rounder James Neesham continued his belligerent ways in his comeback series against Sri Lanka. After clattering five sixes in an over in the first ODI, Neesham clobbered another rapid half-century — 64 off 37 balls with three sixes and five fours — to power New Zealand to 319/7, complemented by Ross Taylor’s 90 and a 87-run knock by Colin Munro.

Opener Munro laid the platform for the big total with his first fifty in last 11 innings coming off 44 balls. The southpaw clattered 87 off 77 balls with 12 fours and two sixes before getting run-out in the 26th over of the innings.

Former skipper Taylor took over from Munro to anchor the rest of the innings. The veteran paced the innings well in a 105-ball knock before Neesham’s big-hitting in the final overs helped the Kiwis garner 97 runs in the final 10 overs.

Lanka skipper Lasith Malinga struck early in the first Powerplay, sending back first ODI’s centurion Martin Guptill for just 13 in the 5th over of the innings and his new-ball partner Nuwan Pradeep sent back Kiwi skipper Kane Williamson for just one.

Munro and Taylor guided New Zealand after the early jolts with a 112-run stand for the third wicket before the former was the victim of a miscommunication with Taylor that saw him charge halfway down the pitch before turning back to the non-striker’s end, too late.

Taylor himself was run out at the death, attempting to steal a second off the throw of Kusal Perera from fine leg. In the penultimate over, Neesham was out to a direct hit from Pradeep, who turned to throw around at the non-striker’s stumps as the batsmen attempted a quick single.

Malinga was the pick of the Lankan bowlers, taking 2 for 45 from his 10 overs.